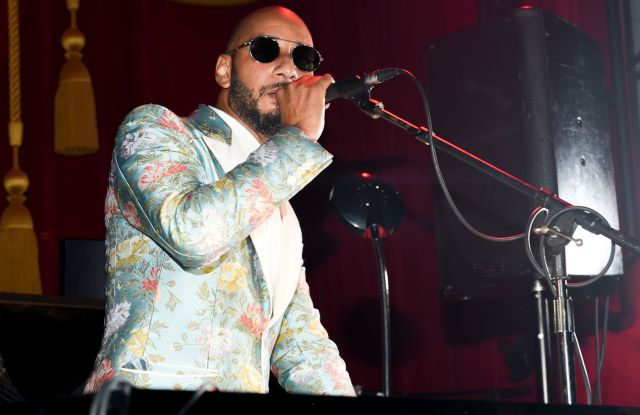 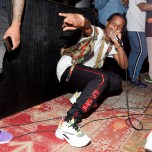 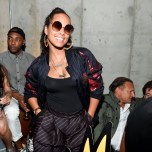 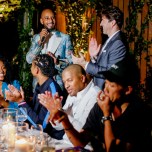 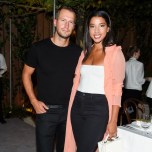 “It was my mission to partner with a brand that had a legitimate heritage that ties back into arts, music and fashion,” explained Beatz of the collaboration. “You see so many brands overdoing it now, but Bally has been doing it since the Eighties.”

Ahead of the old-school affair, which featured a DJ set by Kid Capri and performances from Doug E. Fresh, Slick Rick, A$AP Ferg and A$AP Rocky, an intimate group endured swampy humidity for dinner beneath an outdoor tent.

Guests — including Beatz’ wife Alicia Keys, his son Nasir Dean and DKNY creative directors Maxwell Osborne and Dao-Yi Chow — sat against pillows adorned with the cartoonish fire drawings by Cavolo that will adorn footwear from the collection.

“Flame to me is like energy,” described the heavily tattooed Spanish designer. “When something is happening and it’s full of energy — that’s fire.”

Cavolo, who is the first of Beatz’ hand-selected artists to collaborate with the venerable Swiss luxury brand, has plans to launch his own full capsule collection in spring 2018 that will echo the aesthetic he’s bringing to Bally. “It’s from the same head and the same heart so it’s pretty much the same thing, but the difference is the concept and message. We have a message here of freedom as an artist. Every collection will have a message.”

Shuffling through the packed basement-level space in a form-fitting floral-patterned suit from an undisclosed designer (it was not Bally), Beatz shook hands and took selfies with fans like a politician on campaign.”Tonight we’re changing the game and creativity by bringing it back to the culture,” he remarked.

“The most important moment of glory of Bally was in the Eighties and Nighties when you had the electricity in the air and the connection with music and culture,” said Bally chief executive officer Frédéric de Narp whose crisp white shirt opened more with every sweltering hour of the night.

“Tonight we are celebrating much more than a collaboration,” the Frenchman continued. “It’s celebrating friendship — it’s a family affair. Here tonight is the starting point of a series of surprises and of many more things happening between Bally and Swizz Beatz.”