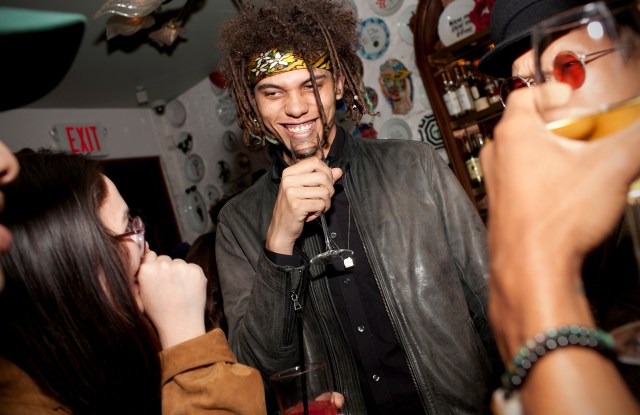 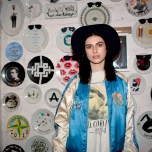 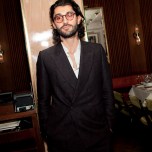 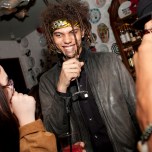 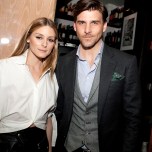 “Unfortunately, we cannot control the weather, still,” said Oliver Peoples creative director Giampiero Tagliaferri, peering out from behind a pair of rosy-lensed glasses. “But we are so used to the sun in L.A. that with the rain it’s totally fine — something new.”

Inside Sant Ambroeus in SoHo, the room was celebrating another something new. Waiters in Oliver Peoples for Berluti sunglasses weaved through the crowd gathered inside the dimly lit confines, which, despite the drizzly weather, were packed for a dinner celebrating the three-frame collaboration between the two brands. “It’s kind of, like, our home here, or at least my home when I come to New York because I love this place,” Tagliaferri added.

Olivia Palermo and Johannes Huebl were posted up near the bar, while Tali Lennox, RJ King and Alexandre Assouline circulated the intimate room.

“Honestly, I’m just here because I was invited and decided to come support the event, I thought it would be fun to be here, why not?” said Roberto Rossellini, huddled with his director girlfriend Kirsten Tanjutco. “I love the shades, she loves the frames.”

“He told me about this and I was, like ‘Um, babe, we’re going,'” Tanjutco said, gesturing to the pair of glasses perched on her face. “This is my life, I have nothing if I take these off.”

Rossellini has been quickly amassing modeling credits since signing with Ford models late last year — he was featured in the recent F for Fendi campaign, walked his first runway for Philipp Plein’s fall show, and has appeared in several magazine editorials. While he’s been appearing more frequently in front of the lens, he’s also heavily focused on his work as a music photographer, shooting videos and portraits of emerging rappers such as Rich the Kid and members of the A$AP Mob. “I love the energy — they’re good people, they make good music and they’re fun, and they have good style. It’s cool being around them,” he said. His pivot into photography and working on film projects seems natural — he shares a name with his neorealist film director grandfather; his mother is Isabella Rossellini. “I started off studying marine biology, I ended up a photographer-model now,” he continued, slightly incredulous. “I don’t really know where my twist happened.”