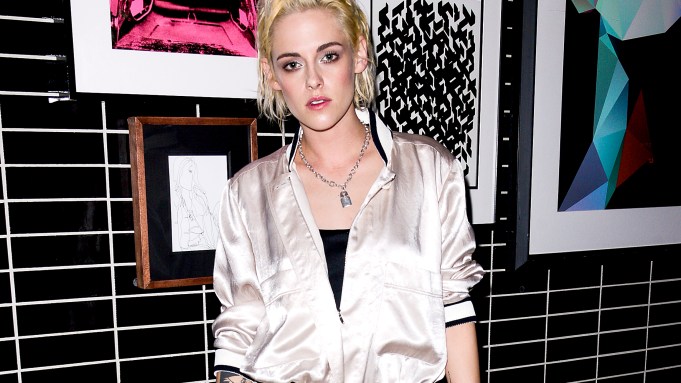 Around 11:30 p.m. on Friday, Kristen Stewart walked up the stairs at The Skylark to arrive at the New York Film Festival premiere party for “Personal Shopper.” About five minutes later, she walked back down. “I don’t think she’s coming back,” a bystander said. “Might as well have some Champagne!”

Stewart had apparently fallen ill that night. She was well enough to pose for a few pictures, but that was the extent of her appearance at the premiere party, hosted by Moët and The Cinema Society. Among those in attendance were Michael Stipe, Cuba Gooding Jr., Ebon Moss-Bachrach, Josh Lucas and Cinema Society founder Andrew Saffir. Though Stewart wasn’t readily available to speak about her role in “Personal Shopper,” the film’s director, Olivier Assayas, was.

“She’s this young woman who has lost her twin brother from a heart disease that she also has,” Assayas said of Stewart’s character. “She’s facing her own mortality in a certain way and at the same time, she’s trying to reconnect with her brother. She’s a medium.”

Does Assayas believe in mediums? “Yeah, why not?” he said. “There’s no scientific proof of it, but yeah. I’m not sure what medium’s connect with. Maybe they connect with themselves or something like that. But I guess I believe in the illusion.”

As the film’s title suggests, Stewart plays a personal shopper — an unexpected choice on Assayas’ end, but a deliberate one nonetheless. “I wanted that character to have not, like, a stupid job, but a very alienating, frustrating job,” he said. “Because you’re doing something that has only to do with surface and you’re not even doing it for yourself, you’re doing it for someone else. I wanted to have someone who is doing a job and she’s trying to do it well, but also the job generates in her some frustration and anger.”

“Personal Shopper” marks the second time Assayas and Stewart have worked together. “When we were doing ‘Clouds of Sils Maria,’ I did not know [Stewart],” Assayas said. “To me, she was an actress and she happened to be great. But gradually, in the process of making [‘Personal Shopper’], I realized how well we connected and how much we had in common and we built this trust. So ‘Personal Shopper’ is a movie that’s really based on this personal trust. She accepted to do a screenplay, a movie that’s weird. It’s risky and it’s ambitious and I think I trusted her with the part, which basically carried the whole film on her back. It was a bond.”