Guests including Chris Brown and Lily Allen watched dancers performing against a backdrop of 3-D projections. 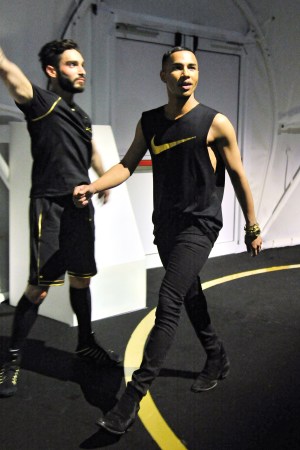 The rain may have held up tennis matches at Roland-Garros, but even a raging downpour didn’t derail the launch of Olivier Rousteing’s collaboration with NikeLab in Paris on Wednesday.

Taking shelter under large umbrellas, guests including Chris Brown and Lily Allen made their way to a white dome set up in the gardens of the Cité Universitaire in Paris. Inside, dancers dressed in Rousteing’s black-and-gold athletic gear performed against a backdrop of 3-D projections.

The Football Nouveau line, which went on sale on Thursday, is the second installment of NikeLab’s Summer of Sport series, which kicked off with Riccardo Tisci. It’s inspired by the lifestyles of professional players competing in the Euro 2016 soccer championship, which runs from June 10 to July 10 in France.

It turns out Rousteing is a soccer aficionado himself. “I know — I have a lot of secrets,” he said with a laugh. “A lot of people judge me on my Instagram, but I don’t share everything. I’m a huge football fan.”

A longtime supporter of Paris Saint-Germain and France’s national soccer team, the Balmain designer played between the ages of 10 and 15.

“I was trying to please my dad, and definitely after I realized how amazing it is to be a soccer player, because you discover team spirit and obviously I discovered what competition means. I love winning, obviously, but at the same time I love sharing, and I think it’s really good values that I learned from that,” he said.

The collection for men and women includes eight pieces of clothing — track pants, warm-up jackets and the like — plus four sneakers inspired by Nike Football’s four pillars: Mercurial, Magista, Hypervenom and Tiempo. It marks the first time the sporting-goods maker has embroidered patterns into its flyknit.

“It was just so nice to mix my glamor and rich couture side with their futuristic and modern fabrics, so it was a really good mix, but a real challenge for me because I never worked with all those fabrics,” said Rousteing. “I wouldn’t say that we did compromise. I would say that we found the right balance.”

Sporting purple hair and a neon yellow sweater, Allen said she was a diehard Nike fan. Soccer? Not so much. “I have been in the past. Not at the moment, because my team’s not doing very well,” said the Fulham supporter.

The British singer is working on a follow-up to her 2014 album “Sheezus” and will likely miss the Euro broadcasts as a result. “I’m in the studio, so I’m probably going to be in America for most of it and I don’t think they’re going to play it there,” she said.

Alexandre Mattiussi, founder of the French contemporary men’s wear brand Ami, had enthusiasm to spare for the game, even if the technical aspects sometimes elude him. “I find it exciting but I don’t get it. When the guy scores a goal, I don’t even know what it means, but I’m the first one to jump up for a Mexican wave,” he said.

“I like team spirit in principle, so I like soccer for that, and I especially like the idea that these events bring people together,” Mattiussi added. “There is that moment when you’re all together rooting for a country, and there’s something patriotic about supporting your team, and that’s wonderful.”

Rousteing, who is friends with Portuguese footballer Cristiano Ronaldo, will have to wait a little before donning his soccer scarf. “I have my men’s wear fashion show on the 25th of June, so I just want to do a beautiful show and after I’m going to enjoy soccer games, for sure,” he said.