Guests including Daisy Lowe, Atlanta de Cadenet, Noémie Lenoir and Ana Girardot turned out for the party in Paris.

By Joelle Diderich and Laure Guilbault on November 4, 2015
View Slideshow 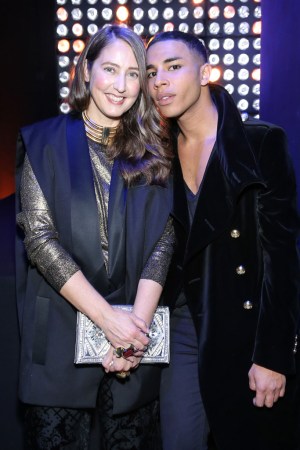 His model army — Kendall Jenner, Gigi Hadid et al. — might not have made the trip, but nobody seemed to mind. A group of vogueing dancers led the way to a black curtain that parted to reveal a pop-up store, prompting a stampede that left the party venue — the former Paris stock exchange building — suddenly semi-deserted.

Rousteing took it in his stride.

“Returning to Paris tonight is a pleasure for me and to see people’s euphoria for this collection brings me back to my roots,” the designer said, pausing to take sips from a glass of Champagne and exchange PDAs with friends.

Based on the reaction to the collection when it was first presented in New York last month, he predicted the heavily embellished pieces would be the first to go. “Even if people might think couture is very elitist, I think a lot of people want couture and that is the most important thing,” he said.

Ann-Sofie Johansson, H&M’s creative adviser, suggested that the most expensive piece in the collection — a black-and-white dress with 250,000 hand-sewn beads, priced at 499 euros, or $570 at current exchange — was not such an easy sell.

“That is quite expensive and it’s quite heavy, so you need to be able to carry that off, but otherwise everything went really well, I think,” she said of early reactions to the line. “For me, it’s a very versatile collection, really, because you can wear it in so many different ways.”

Indeed, the Paris crowd had its own ideas on how to adapt Balmain’s bold and sexy designs to the local aesthetic, which tends to be more low-key.

Ana Girardot was sporting a peak-shouldered black blazer with forest green suede biker pants. “Clothes you can wear on a Monday afternoon to go buy your baguette,” she said with a laugh. “I have a dinner with girlfriends after. Too bad, it would have been nice to shop for them, but I don’t want to get crushed.”

The French actress, who stars in the supernatural TV series “The Returned,” is busy shooting a movie directed by Cédric Klapisch. “I play a daughter who’s taking over her father’s vineyard. We are shooting all year long in Burgundy. I am learning a lot about wines, the grape varieties. We do tastings,” she explained.

Noémie Lenoir paired a black body-con dress with thigh-high boots. “It tones down the very sexy aspect,” said the former L’Oréal brand ambassador. “I gave birth to a baby girl a month and a half ago. I had gained 48 pounds, so you know,” she shrugged, despite having regained her model figure in record time.

Jeanne Damas wore a tailored blazer as a dress. “Do you think it’s too short?” she asked. The Parisian “It” girl is working on her first collection of 25 pieces, named Rouge, set to debut next March. “It’s my style, very Seventies, feminine, with suede and lace,” she teased.

Marie-Ange Casta went for the T-shirt festooned with the Balmain logo. “Balmain girls aren’t afraid of showing off — they’re full of energy,” she said. Atlanta de Cadenet, meanwhile, was in selfie mode with Phoebe Collings-James. “We are going to DJ together at the London launch tomorrow,” she revealed.

Johansson said the Swedish high street giant has seen a spike in social media engagement around the collection, reflecting Rousteing’s high profile. “He has so many fans out there and those fans also have spoken to H&M,” she said. “We always love to listen to our customers and they told us that they wanted to have Balmain.”

Rousteing hinted he is ready to press the flesh. Rumor has it he will be in one of H&M’s Paris stores for the official launch of the collection on Thursday.