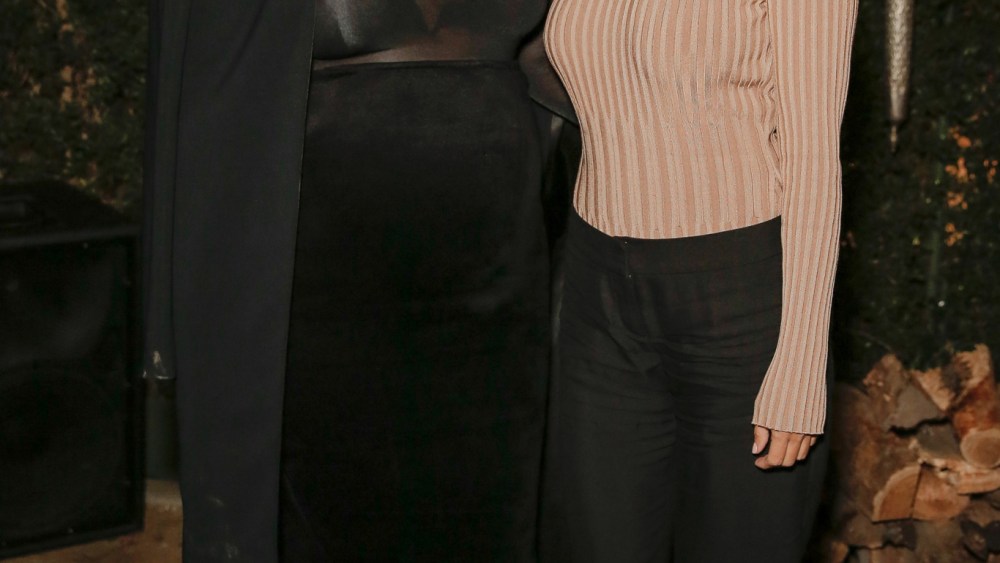 “Can I swing at the same time?” Olivier Rousteing asked, mid-interview, as he sat perched on a swing that dangled beneath a large tree overlooking the Hollywood Hills. “I want to. It’s my b-day, so I’m free to do whatever I want.” Balmain’s creative director was in town for a belated birthday bash Friday night at a private Los Angeles residence. The alfresco evening, presented by Beats, had a low-key vibe even though the turnout was anything but. Guests in attendance included Jennifer Lopez, Justin Timberlake, Jessica Biel, the Kardashian-Jenner clan (naturally), Mary J. Blige, Rosie Huntington-Whiteley, Kate Hudson, Cara Delevingne, Angela Lindvall, Jourdan Dunn,  Jaime King, and Chanel Iman.

Rousteing’s actual birthday was on Sept. 13, but needless to say the designer has had a busy few months. Last week, he debuted his Balmain x H&M collection with a large scale runway show in New York. “I’m ready to relax. I had an amazing show for H&M. I was really, really happy with it. Some people didn’t get it, you know? But some people got it,” said Rousteing, seeming to sum up his entire tenure at Balmain.

With age comes patience, wisdom, perspective, and restraint—something Rousteing seemed ready to put into practice. “At the end of the day, being 30 years old makes me stronger and [ready to] actually face the world in a different way than I used to when I was younger,” he said. “I have achieved so much at my age. I just want to enjoy this beauty that I have in my life. Sometimes we forget that fashion is amazing, but you know what’s even more amazing is just feeling loved. And that’s what I’m going to feel tonight. Tonight is just about love, fun, and friendship. That’s what makes me happy and that’s what makes me love fashion.” Rousteing was scheduled to head back to New York the next day in order to shoot a campaign on Sunday, but first, some fun was in order.

Kim Kardashian and sister Kourtney were among the party’s earliest arrivals. “We love Olivier,” said a very pregnant Kim, perched on a couch. “We spend so much time with him. He’s one of my really good friends. I can’t travel anymore, so I’m so thankful that the party’s in L.A. and I get to celebrate his birthday with him.”

“We wouldn’t miss it,” added Kourtney, who paused. “I rode with the pregnant girl, so we won’t be out too long, but long enough to have fun.”

Next came Kris Jenner with boyfriend Corey Gamble. Kylie and Kendall joined later in the evening — though the duo was less chatty. “I’m not talking tonight. Sorry,” said Kendall when approached.

Jada Pinkett-Smith also made it a family affair with son Jaden and daughter Willow. They cheered one another on from the sidelines as each posed for photos. During one impromptu photo shoot, Jada started shimmying to a Michael Jackson song. Her son shook his head, embarrassed.

The party also drew a solid group of stylists including Johnny Wujek, Elizabeth Stewart, Tara Swennen, Petra Flannery, Emily Current, Meritt Elliott, Jeanie Yang, George Kotsiopoulos, Jen Rade, and Rachel Zoe. Some attendees, like Alessandra Ambrosio, brought presents (a Tiffany & Co. frame) while most provided the greatest gift by showing up wearing Balmain — Mary J. Blige included. “I love that it’s real fashion,” she said. “It’s what fashion used to be. It’s not casual at all. It’s getting dressed, but not overkill. I’m a fan of Balmain and a friend of Olivier. I’m here to celebrate his birthday with him. And be beautiful and fly in his clothes.”

The Backstreet Boys may have performed at last week’s Balmain x H&M show, but on this occasion the night’s soundtrack consisted largely of hip hop. Huntington-Whiteley and King were among those who hit the dance floor to songs like Missy Elliott’s “Work It,” Jeremih’s “Don’t Tell ‘Em,” and Kanye West’s “Flashing Lights.” Kim Kardashian missed the latter as it was past her bedtime. But sister Kendall – still not talking – was going strong as she kept close to fellow model Delevingne for most of the night. At one point, extraordinarily close, as Delevingne jokingly straddled the Jenner sisters on the party’s swing. The rest of the evening, the girls wandered around barefoot, dancing, and even singing Taylor Swift’s “Bad Blood” to one another.

On again/off again couple Lopez and Casper Smart swooped in three hours into the party. Timberlake and Biel—who were honored at the GLSEN Respect Awards in Beverly Hills earlier that night after Timberlake’s honor on Thursday at the Fashion Group International Night of Stars in Manhattan —arrived shortly thereafter, just in time for rapper Tyga’s surprise performance. “Only for you, man,” Tyga told Rousteing, launching into hits like his Chris Brown collab “Loyal.” Timberlake watched from the party’s balcony while Biel hung out with friends on a plush couch.

“This is the party to be at,” said Iman, who has worked with Rousteing since he first signed with Balmain at age 26 in 2011. “It’s been exciting to see him rise to the top.” The gathering continued well into the night. As Rousteing looked around, he reflected, “I’m going to make sure I enjoy every minute in L.A. and every minute with my friends because everybody is busy, but we always find the time to share moments together.”