Mary-Kate and Ashley celebrated the launch at Barneys New York on Wednesday night. 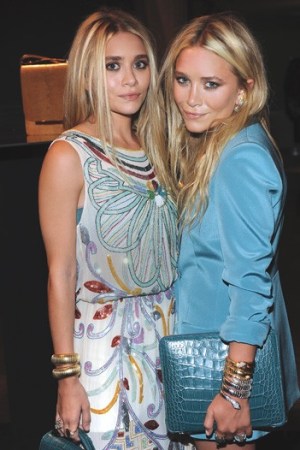 One could make sport, and some have, of guessing which Olsen sister is which based on style cues alone. But at Barneys New York on Wednesday night at a cocktail party to celebrate the launch of their new handbag collection for The Row, Mary-Kate sported a sun-dipped tell.

“He’s saying that you’re more tan than me,” Ashley explained to Mary-Kate as the pair took a brief break from the party.

With a resort collection out of the way and a spring line looming, the pair could be excused a little off time, which they had taken in June. The generally positive reviews from the cocktail crowd — which also included younger Olsen sister Elizabeth — seemed to signal a busy second half to 2011. A crocodile-constructed backpack with a price tag to rival a year at a private university seemed to hold a special fascination among the fifth-floor audience.

Later in the evening, the designers moved the crowd further up the East Side to John DeLucie’s yet-to-open Crown. Though a few New York scene types, such as Cassie Coane, Harley Viera-Newton and Jared Seligman were in attendance, dinner was mostly a friends and family (and editors and Barneys execs) affair. In a blog post that ran on the Barneys Web site that day, the sisters had interviewed each other. Asked whose closet she would raid if given the chance, Mary-Kate answered Pablo Picasso. Earlier at the store, her answer had inspired WWD to embark on a tried-but-true dinner party game with the designers. Any historical figures they’d care to dine with if given the chance?

“I guess he would be one of them,” Ashley said before landing on another early-20th-century master. “Egon Schiele.”

Her sister was a bit more equivocal: “Probably someone I haven’t discovered yet.”

Though the night was fashion-first, it seemed worth a try to glean an opinion from the sisters, and onetime tabloid obsessions, on the beating the celebrity press has been taking lately. Ashley returned serve.

“What do you think of it?” she asked.

WWD said something along the lines of reaping what one sows.