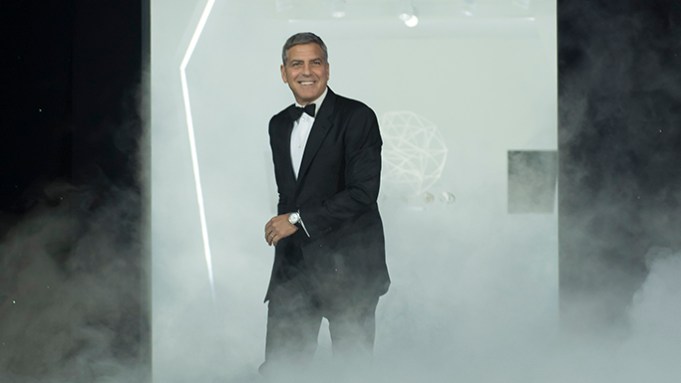 Omega boldly took the 45th anniversary of the Apollo 13 mission where it has never gone before, turning a Houston area airport hangar into a moonscape and enlisting brand ambassador and unabashed space enthusiast George Clooney to come along for the ride.

The invitation-only gala Tuesday was a celebratory look at the relationship Omega watches and the space program have shared since 1965, and Omega president Stephen Urquhart wanted it to be an event to remember.

“We’ve had low-key events in the past, but we felt the Speedmaster has not had the recognition it deserves as part of American history, so we wanted to honor it by doing something big,” Urquhart said. “With [astronauts] Jim Lovell, Tom Stafford and Gene Cernan here, it brings all of this together. It’s unbelievable.”

Paris-based event planners Bureau Batek set the otherworldly tone from the first steps of the jet black carpet to the row of chic futuristic models saluting guests on the way to a stark white space capsule that was the first of two destinations for the evening.

Playful nods to space snacking included hydro pack Tang infused with grapefruit juice vodka cocktails before the dinner. The space capsule orb was also a showcase for Omega watches, and drew JoAnna García Swisher and Yvonne Strahovski, stars of the new ABC miniseries “The Astronaut Wives Club,” airing in June. The television show is based on the book of the same name and author Lily Koppel served as the evening’s master of ceremonies. Filming of the miniseries was divided between New Orleans and the Houston area during the summer of 2014, and almost a year later, Swisher is looking forward to the show airing.

“This is a dream come true. It has been a long road to get to this place,” she said.

For the Australian-born Strahovski, starring in the show gave her an opportunity to delve into American history and the evolution of the space program. “I learned so many things during this. I’m Australian and we had Irish and English actors in the series and we found it fascinating,” Strahovski said.

But there was no greater fan of NASA and its legendary astronauts than Clooney. An unabashed lover of space exploration, Clooney was passionate in when speaking about the Apollo 13 mission. “It’s like getting in a ’57 Chevy and taking it to the moon and back. Those were very brave men,” he said. “They are absolute heroes.”

Clooney’s new space-themed film “Tomorrowland” opens May 22 and speaks to his passion for space exploration rooted in his childhood. “It was a big part of my growing up. It’s just the bravest thing I’ve ever seen in my life and I wish and I hope that we will find a way. I would really love for us not to abandon the program,” Clooney said.

Clooney’s wife Amal Alamuddin was also scheduled to attend the Omega celebration, but was called to London at the last minute. Clooney didn’t publicly speak about Alamuddin, but was clearly enamored with the opportunity to meet and spend time with astronauts Cernan, Stafford and Lovell. During the dinner, he chatted and laughed with Cernan over veal loin, eggplant caviar, vegetables and pinot noir.