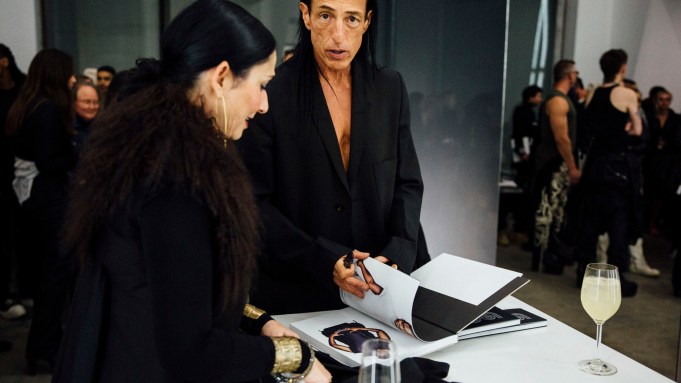 “Are you having a good time?” asked the man of the hour, Rick Owens.

After 16 years in Paris, the California native marked his return to Los Angeles, hosting a book signing and party at his La Brea Avenue store on Monday night.

Among the fans who came by was singer Teyana Taylor.

“I got my book signed,” she said. She’s been busy recording her latest album, which drops Jan. 31, but nothing would stop her from missing the party; she even changed her flight. “I’m completely fangirling. I almost cried. This is too much. I’m overwhelmed but in the greatest way ever.”

It was her first time meeting Owens. “I’m just like everybody else here, supporting,” she said of the designer who started his business in L.A. in 1994. “He makes me embrace being myself and living in my skin. I feel like I can be chic and cozy at the same time and swaggy, all in one, in my Rick Owens.”

Of the countless autographs given and selfies taken, Owens said it was a “very fulfilling” experience.

“Having all of that good energy focused on you, I relish it,” he said. He’s released two books, “Legaspi by Rick Owens” and “Rick Owens Photographed by Danielle Levitt,” both published by Rizzoli. “I suck it all up. And I just feed off of it. So, if they’re going to offer it, I’m going to take it.”

Congratulations were in order for more reasons than one. It was his 58th birthday, after all — though it seemed more of an afterthought.

“I don’t always pay attention to my birthday,” he said. “It just happened to fall along the time we were here.”

After the signing, the store was transformed into a makeshift club with blinding strobe lights and fog, and Owens let loose on the dance floor alongside his wife, muse and creative partner, Michèle Lamy.

“Since we moved, I’ve been coming more often, but Rick never came back since 2003,” shared Lamy. Though now based in Paris, the two spent many, formative years in L.A., with Lamy becoming a prominent nightlife figure with her former hot spot: Les Deux Cafés. “There is such a fantastic spirit in L.A. that I thought it was the time to come back. I’m saying it now, if I find a huge warehouse on the beach, he will come back, too. We will go back and forth. It’s important.

“Most of the artists of the world are coming from L.A. or are in L.A.,” she continued. “Everybody is telling me, ‘Oh, you’re going to see, L.A. is going to be what Paris was in the Twenties and Thirties.’”

The party, which had a line on the sidewalk, a line in the courtyard and a line inside the store to get books signed (thank you, fire marshal), attracted a who’s who of the O.G. L.A.-style scene, including Sarah Stewart, buying director of Maxfield, former fashion editor Anne Crawford, now Owens’ L.A. ambassador, stylists Maryam and Marjan Malakpour and Jeanne Yang.

“I think I might have been client zero,” said jewelry designer Loree Rodkin, adding, “He put L.A. fashion on the map, he was the first person with a real point of view.”

“I introduced him to Carine Roitfeld, then she became obsessed with him for life,” said Victoria Brynner, founder of L.A.-based consultancy Stardust Brands, which connects fashion and luxury brands with talent. “Then one day, I asked if he could do an outfit for my wedding. I went into the Las Palmas studio and there was this little pile of fabric on the piano, and it was a skirt and T-shirt. It was perfect. And I still wear his stuff, I wear it to the bone.”

“When he had his little place in Hollywood and I wasn’t earning s–t, he said, ‘Let me give you some stuff for free,'” remembered Yang. “I was so broke, I had to sell it all to Wasteland. I could kick myself, all those beautiful dresses.”

And party planner Bryan Rabin, creator of Giorgio’s nightclub, where Owens dropped by Saturday night, remembered meeting the designer in the Eighties. “He hasn’t changed,” said Rabin, recalling how he listened to Maria Callas, Motörhead and Iggy Pop while he working. “I’d go to his atelier and see him and his assistant stirring the tea dye, and he’d say, ‘Oh Tinkles, just take a seat.'”