‘On the Road’ Hits New York

Showing some major skin in a sheer Erdem number, Kristen Stewart recalled her first time reading the novel, as a freshman in high school. 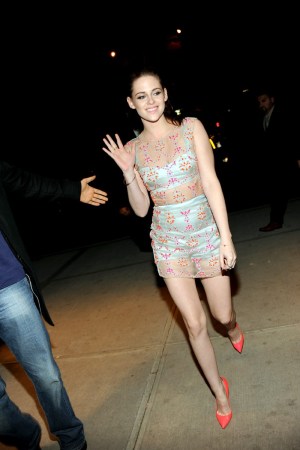 Kristen Stewart has been called many things by the press, yet there is one glaring omission on the list — bookworm.

On Thursday evening, the 22-year-old actress feted her latest film, “On the Road,” with a Grey Goose-sponsored screening at the SVA Theatre in New York, causing a blinding frenzy — a veritable fireworks show of flashbulbs — on the red carpet as photographers clamored to snap a picture of the starlet.

Showing some major skin in a sheer Erdem number, Stewart recalled her first time reading the novel, as a freshman in high school. “I’d always done well in school, but I was never fueled by it. I just wanted to be a good kid,” Stewart said. “[Reading ‘On the Road’] really kick-started something for me. It probably coincided with the age for me as well. It’s that moment when you look up and realize that you actually choose your surroundings.”

A Dior-clad Kirsten Dunst capitalized on the Stewart-induced mob, successfully sneaking past her costar to take her seat inside the theater alongside guests such as Ezra Miller, Sky Ferreira and Christopher Abbott.

Sam Riley, who portrays Kerouac’s alter-ego protagonist, Sal Paradise, admitted that he had only read the novel after receiving the script but felt a kinship to the author nonetheless.

After the film, guests made the ten-block trek over to the Top of the Standard, where a few brave patrons took advantage of the hotel’s outdoor ice-skating rink. Keeping with the beatnik theme of the film, the Meatpacking hot spot eschewed club music in favor of a live jazz band.

As additional guests, such as Alexa Chung and Ari Graynor, slipped in, trays of sliders and truffled grilled cheese made the rounds, shortly followed by a batch of crowd-pleasing Baked by Melissa cupcakes.

Director Walter Salles and Riley mingled by the crowded bar area, while rumored couple Garrett Hedlund, a standout in his role as bad boy Dean Moriarty, and Dunst kept to themselves at reserved tables flanking the perimeter of the room.

Given the party’s strict no-photography policy, the room teemed with anticipation of a potential Robert Pattinson sighting, yet Stewart chose an even more surprising — albeit, less juicy — party companion: Patti Smith.

The pair stayed under the radar at a table overlooking the Hudson River, where the actress appeared all smiles, predictably trading in her hot-pink Louboutins and red-carpet frock for some sneakers and a well-worn hoodie.