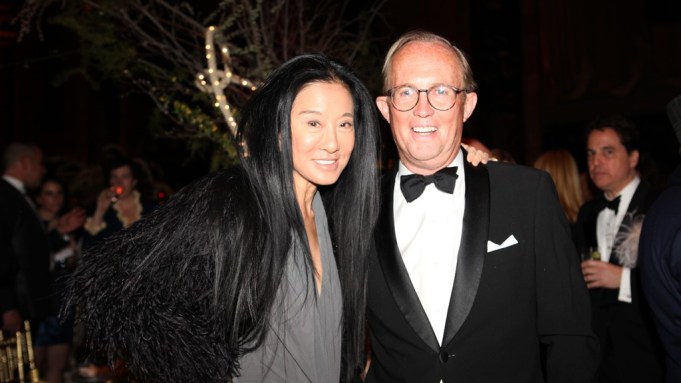 Uptown denizens know a thing or two about high society. Such was the theme at the Lenox Hill Neighborhood House Spring Gala Wednesday evening honoring long-time supporters Caroline and Thompson Dean. The organization, which provides an array of services to those in need residing on Manhattan’s East Side, enlisted 41 interior design luminaries to furnish a table each inspired by the lofty “high society” theme. The Veranda-hosted event raised more than $1.3 million.

The Ladies Who Lunch set, swathed in voluminous chiffon, tulle and duchesse satin gowns, streamed into Cipriani 42, ferried along by their tuxedoed counterparts. Guests including Dennis Basso, Vera Wang, Tory Burch, Jamee Gregory and Adelina Wong Ettelson were encouraged to bid in the silent auction (up for grabs: a perforated leather Roberto Cavalli tote, a pair of tickets to a Metropolitan Opera dress rehearsal with backstage passes, etc.) and inspect the ornamented dinner tables.

Alberto Villalobos and Mercedes Desio’s table featured glass terrariums housing cream cabbage roses below; tall tubular vases sprouted above with gladiolus blossoms peeking out, and on top, a flamboyant peacock with its calla-lilied tail cascading down.

Others ranged from the vernally and florally focused to the more campy options. At Andrea Stark and Lewis Miller Design’s table, a life-size cutout of Diana Vreeland, hands on hips, a satisfied grin across her face, stood between two seats. Cocktail minglers took advantage of the photo op. A few away, a Warhol-ed Blondie gazed down at diners, a glistening disco ball spinning underneath her, at a table dubbed “V.I.P. Playground of Studio 54” by Timothy Brown Studio.

Elizabeth Pyne of McMillen Inc. took a more literal route with her table, replete with a mobile floating above diners, dangling from its arms black-and-white film stills from Cole Porter’s “High Society,” starring Frank Sinatra, Grace Kelly and Bing Crosby. The decorator hoped the images would incite cross-table chatter. “When you’re sitting at dinner, maybe you don’t have much to say to your dinner partner, you can talk about the images,” she said.

“This one’s the best,” Gregory assessed between sips of her Bellini. “It really translates the theme. It’s high society.”