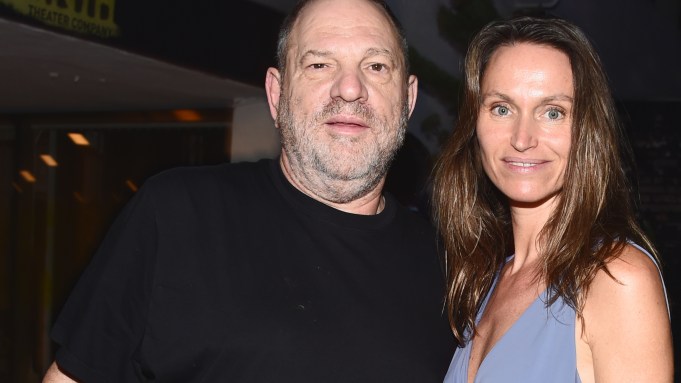 Outside in the courtyard of Westbeth Artists Community on Tuesday evening, a lively crowd was sipping on wine and prosecco in the cool early fall breeze. But the real party was inside the building’s basement, where photographer Anne de Carbuccia had staged “One: One Planet One Future,” an exhibition of her environmental photography.

She had flooded the basement space with water — the room had previously been underwater a few years ago as well, due to Hurricane Sandy — and built elevated wooden walkways into several rooms, where her photographs of shrines were hung in dim lighting. Harvey Weinstein, Malik Wormsby and a mix of creative types made their way through the exhibit during opening night.

The humidity of the basement added to the effect. “I like the art, but also the space and setting it is in — it really makes you aware of what the art is trying to bring out,” remarked Olympic fencer Nzingha Prescod. “It’s kind of like you’re in a jungle.”

Photographer Fabrizio Ferri was taking in the exhibit with his wife. “I knew the space [beforehand],” he remarked. “To come here and see it like this, it’s really amazing,” he continued. “There is something mysterious but at the same time elegant and historical about this place. It helps you perceive this not really as photos, but as something else. Even the humidity works.”

The exhibit also features a video in which de Carbuccia details the environmental aspect behind the photographs. “[De Carbuccia] brought up a great point about focusing on what we have,” said actress Aleisha Allen. “There has been a lot of damage done, but if we shift our focus to what we have, and working to conserve it now, we can make a big change.”

And with a primary polling location located upstairs (Brooke Garber Neidich swung by to cast her vote), the idea of change was even more strongly present in the air that night.