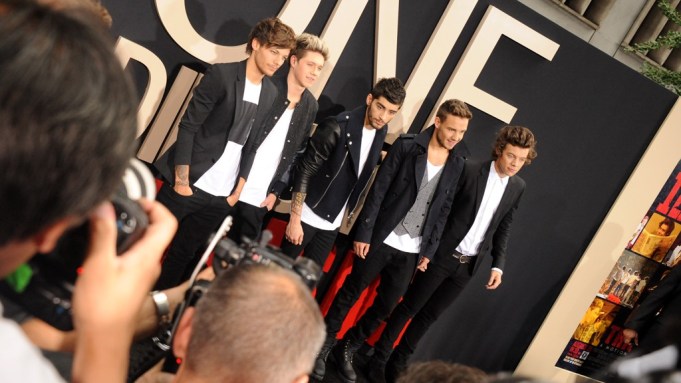 A red-carpet-wide gap yawned between generations at the Monday night premiere of “One Direction: This Is Us,” a new documentary on the reigning Anglo-Irish boy band. On one side: a corral of ravenous “Directioners,” median age: 13, driven to tears with anticipation while debating everything from their favorite One Direction song to which member has the best forehead (Louis triumphed over Harry, a surprising upset). Less than 20 feet across the way, a press line of journalists, median age: preferably undisclosed, passed the time with The New York Times crossword or last-minute interview prep (“So who is the blonde one?”).

Held at the Ziegfield Theater, the premiere garnered a massive crowd, which included Stephen Baldwin, Perez Hilton and Madeline Brewer of “Orange Is the New Black,” all hoping for a glimpse of the fab five: Niall Horan, Zayn Malik, Liam Payne, Harry Styles and Louis Tomlinson. Lucky fans who had made an impromptu campsite around the theater’s perimeter in the preceding 24 hours were welcomed onto the red carpet, where there were goodie bags courtesy of Yahoo and Office Depot (an odd benefactor until one considers the binder royalties), cosponsors of the event.

“This is not real life,” one tween squealed, popping on her brand new Yahoo-logoed sunglasses.

The film, which follows on the heels of similar cinematic exercises in myth building from Justin Bieber and Katy Perry, follows One Direction, a by-product of Simon Cowell’s “X-Factor” reality competition, over the course of several months, splicing behind-the-scenes moments with concert footage and private home movies. It’s all in 3-D, of course, and directed by Morgan Spurlock.

“The biggest difference from my previous films and this is that I’m not in it,” the mustachioed “Super Size Me” director said. “So you won’t have to look at this ugly face. There’s five very handsome guys that you get to look at the whole time.”

Spurlock walked away from the experience with 900 hours of footage; a new favorite One Direction song, “She’s Not Afraid,” and plenty of material for the DVD bonus features.

The boys themselves hit the carpet at 6 p.m. sharp, eliciting the expected high-pitched screams and free-flowing tears.

“There was one scene where Niall rescued a baby lamb from a shark’s mouth, and that didn’t make it, which is weird,” riffed Styles, the band’s youngest member and most likely to jettison into solo territory à la Justin Timberlake.

“I don’t think you could ever get used to this,” Styles said, gesturing to the mob of die-hards behind him. “It’s amazing.”

Clad in expertly coordinated black-and-white separates, the quintet shuffled down the press line in a huddled pack, egging each other on and posing for the endless flashbulbs, before separating for individual interviews.

While Horan (the blonde one) attempted to flag down his mom as she posed for selfies with eager fans, Styles spoke of the band’s whirlwind weekend in New York, which included a “Today Show” concert on Friday morning and Sunday night’s MTV Video Music Awards, where the group’s “Best Song Ever” won Best Song of the Summer.

“New York is really cool,” Styles said. “I like going out at night.”

A nod to his rumored underage bad boy ways?

The boys did get their fill of teenage rebellion shortly after, however. As several publicists shepherded the lads into the theater, Horan broke free from the pack, cartoonishly galloping back down the carpet to talk to fans. A sturdy bodyguard attempted to chase after him, but it was too late, as Malik, Payne, Styles and Tomlinson immediately followed suit, each taking the time to pose for pictures and warmly accept hugs.

Eventually, the band found their way back into the theater.

“And ‘The Beatles’ are out,” sighed a relieved photographer, happily packing up his equipment and heading home for the night.