British GQ and One For The Boys hosted a karaoke party to celebrate the closing night of London Collections: Men at Abbey Road Studios. 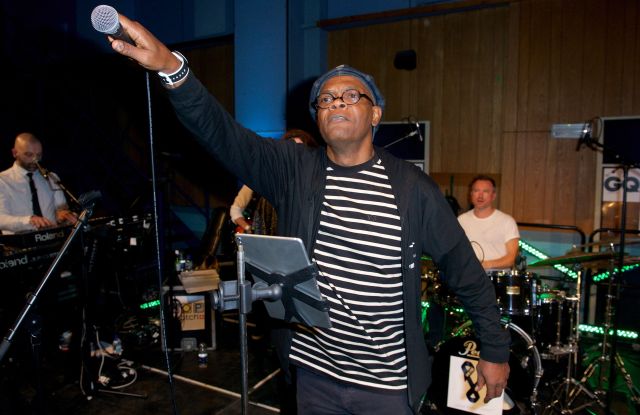 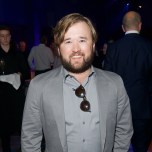 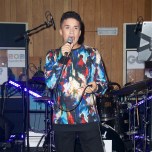 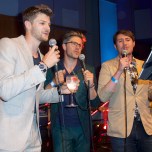 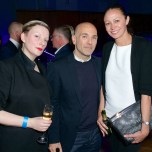 SING-A-LONG: Patrick Grant was one of the first brave souls to take the microphone at the London Collections: Men closing night karaoke party hosted by GQ and One For The Boys at Abbey Road Studios in North London. The E. Tautz designer belted out Bon Jovi’s “Living On A Prayer” to the audience, which included Tico Torres, Bon Jovi’s actual drummer.

“You gotta have a lot of balls to do that song; it’s hard,” opined Torres. For his part, despite claiming not to sing, Torres stepped up and gave a pretty impressive rendition of “New York, New York.”

The evening’s hosts, Samuel L. Jackson and GQ editor Dylan Jones, did a duet of “I’m Your Puppet” before Lou Dalton had a crack at “Cocktail Bar” by Human League. Jackson returned to the stage at the end of the evening to sing the 1986 R&B ditty “Word Up” by Cameo.

It was hardly a level playing field, though, with the likes of former “The X Factor” star Jahméne Douglas and music producer Jillionaire intimidating some members of the audience with their vocal prowess.

“What the f–k was that?” exclaimed Irish TV presenter Darren Kennedy after Douglas had belted out Etta James’ “At Last.” “Who will want to follow that?”

Kennedy did. He teamed up with YouTube personality Jim Chapman and GQ’s Nick Carvell to sing Wham’s “I’m Your Man.” “It had to be done,” Carvell reasoned later on the dance floor.

Models Jack Guinness and Daisy Lowe were the evening’s comperes and marshaled the performers, which also included “Captain America” and “Avengers” star Anthony Mackie, who sang Cee Lo Green’s “Forget You” and actor Richard Roundtree, who gave a debonair performance of “Fly Me to the Moon.”

The event, sponsored by Swatch, was the second party in as many days for the One For The Boys charity, which was founded by Sofia Davis and chaired by Jackson, and which aims to raise awareness of male cancer and get men talking about their health to encourage early detection.

Roundtree told how he was in Costa Rica when he first discovered a lump in his chest. “I was in the shower and felt something a little peculiar,” he said. “We finished filming about a week later and then I went to my doctor in L.A., who knew me to be a bit of a hypochondriac and said it was probably nothing but said, “While you’re here, let me stick a needle in that.’ He took a biopsy then and there.”

The doctor told him three days later that he was one of a very small percentage of men to be diagnosed with breast cancer. “It was devastating. I just kept thinking about my kids and thinking, ‘Breast cancer? Women die from this!'” he said, adding that he beat the cancer by having a double mastectomy and six months of chemotherapy.

“And Hollywood doesn’t like sick actors. You have to get a physical for every project you do — for insurance issues — so I would just lie, because I liked my job and wanted to keep doing it,” the “Shaft” actor continued. “I remember guest starring in an episode of ‘Dr. Quinn, Medicine Woman’ and there was a scene where I had to take my shirt off. Due to the fact that it was pretty early in the morning, I managed to convince them it was going to be cold so they should let me wear an undershirt for the shot, so they never knew.”

Other guests included Johannes Huebl, Haley Osment, Robert Konjic, Jason Basmajian, Dougie Poynter and Christopher Raeburn, who was last seen complaining about the “five smart arses” who had suggested he sing “anything by Calvin Harris,” to whom he bears an uncanny resemblance.