The Party, The After Parties: The CFDA Awards

The celebration on Monday night stretched from Lincoln Center to Westway. 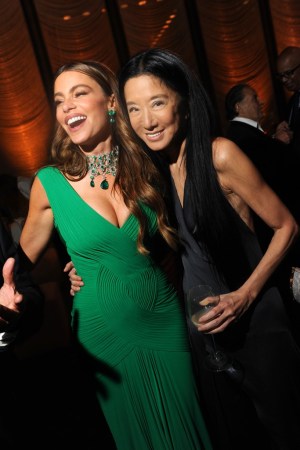 “Strippers!” Phillip Lim chirped at The Westway, the former gentleman’s club in New York’s West Village that on Monday served as the site of a late-night after party to celebrate Riccardo Tisci’s International Designer Award from the CFDA.

“I’ve never been to a fashion party with strippers,” added Lim, himself an award winner for accessories.

Few others probably had either — or at least wanted to admit it. Four barely clothed women worked the catwalk in the club’s main room for most of the evening, popping up in the Instagram feeds of many fashion folk. Alexander Wang was in a signature white T, sitting by himself checking his phone underneath the DJ booth, absolutely uninterested.

The designer had lost the women’s wear award earlier to peers Jack McCollough and Lazaro Hernandez of Proenza Schouler, but seemed relieved to hear some fans were defending him on social media.

“It’s always an honor to be nominated,” he said before going back to checking his phone.

Tisci showed up around 1 a.m. accompanied by Jessica Chastain. The pair promptly made for a banquette in back. The crowd also included Karlie Kloss, Linda Evangelista and Joan Smalls. A late-night appearance by Kate Upton gave the strippers a run for the Instagram attention crown.

RELATED STORY: On the Red Carpet at the CFDA Awards >>

Many of the guests had come from the Top of The Standard, where Swarovski hosted its official after party. At that party, Public School’s Dao-Yi Chow and Maxwell Osborne celebrated their Swarovski Award for Menswear on the dance floor while Mia Moretti spun in the DJ booth. Owing perhaps to the hour, The Standard’s waitstaff mixed in dessert with passed Champagne flutes, offering up macarons and cupcakes. Scott Sternberg eagerly grabbed one of the latter while his date, Greta Gerwig, posed for photographers. Douglas Booth and Hailee Steinfeld, who play Romeo and Juliet respectively in Julian Fellowes’ upcoming film adaptation, had some trouble figuring out the hotel’s elevator but eventually made it in.

The night’s party peregrinations had begun farther uptown at the Four Seasons, where Vera Wang toasted her Trova for Lifetime Achievement. Sofia Vergara, Michael Kors, Karolina Kurkova, Donna Karan, Calvin Klein, Kate Mara and a host of well-wishers filled the bar before heading into the pool room for dinner. The award ceremony’s host, Andy Cohen, took a moment to assess his gig.

“Very intimidating room, but I had a great time,” he laughed. “I expected the worst so then I had a blast.”

For such a celebratory night, there was a curious lack of energy for parts of the evening. Maybe the event needed more of Vergara’s va-va-va-voom. Cohen, Bravo’s ring master and Real Housewives-tamer, delivered a broad comedic shtick to the notoriously tough crowd that covered a multitude of sins, including a few videos and visuals that didn’t quite land (DVF loves the Army, anyone?).

His biggest moment of the night came when he announced that Hillary Rodham Clinton was on site to honor her friend Oscar de la Renta with the Eleanor Lambert Founders Award. If Cohen’s experience handling Housewives steeled him for the fashion crowd, Clinton’s lifetime of handling and hosting heads of state put her in a class by herself. So poised, she looked like she could have delivered her address in her sleep. And she was funny, too. “Now that I have some more time on my hands, I am going to be pitching Andy and others on a new show for Bravo, to sort of fill that gap so apparent to some of us,” said Clinton. “All you need is a small but passionate audience to be successful. We can call it ‘Project Pantsuit.’ We have all kinds of ideas. Just call me after tonight.” For the record, Clinton’s Oscar de la Renta pantsuit was pitch perfect for her.

Never one to miss an opportunity to voice his opinion, political or otherwise, de la Renta immediately turned the spotlight back on Clinton when accepting his award. “I have to tell you that I hope that for all of us, and perhaps she wouldn’t like me to say this, I hope that she is going to be our next president,” he said. Judging from the crowd’s ovation, there were more than a few Democrats in the room.

Other highlights of the production included the video intro to the Menswear Designer of the Year Award, claimed by Thom Browne. In it, a choir of male models with the faces and voices of angels sang Daft Punk’s “Get Lucky,” while styled in designs by all three nominees. Then there were Vera Wang’s eerily ethereal film of a little girl encountering a group of models in a mansion’s garden, and Tisci’s take on Marina Abramovic’s “The Artist Is Present.”

Some amusing moments were less planned than others. When Suno’s Erin Beatty and Max Osterweis accepted their Swarovski Award for Womenswear, the duo launched into usual expressions of gratitude to friends, family, etc., though Beatty dryly noted, “Ironically, this is the first thing my family hasn’t been to. Clearly they’re bad luck.”

Ralph Lauren, presenting Wang with her Geoffrey Beene Lifetime Achievement Award, made no secret of the designer’s often endearing neuroses, even offering sage advice to the stage-phobic Wang: “Don’t let yourself freeze.” Thanks, Ralph.

“Vera is very dedicated and very special,” he said. “No matter what I say to her, I can’t make her too happy because it won’t work. Vera always has to have a little pain.

“I watched her career, piece by piece, and I said, ‘Vera, you are doing so well,’ he added. “She said, ‘Well, I don’t know, I am not so sure, my father is spending so much money and I am afraid I am going to lose all the money and it’s making me nervous.’ I see her again, we smile and talk, and I say, ‘Vera, how are you doing?’ and she says, ‘I don’t know, Ralph.’ I am sort of figuring maybe she will come back to work for me because maybe she needs the job.”