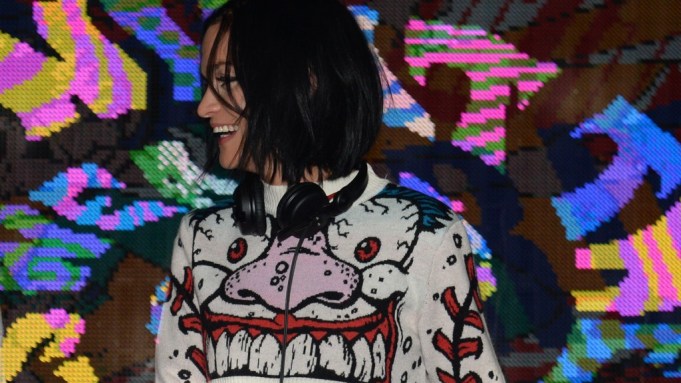 For many years now, Chloë Sevigny has been a fixture in the fashion industry, everything from an “It” girl to a muse to an ersatz designer. In the new Amazon pilot “The Cosmopolitans,” by her “Last Days of Disco” director Whit Stillman, Sevigny gets to reverse roles. She plays a fashion journalist, a wry observer of the scene rather than one of its more-recognizable faces.

On Thursday, she was at the presentation of her sixth collaboration with Opening Ceremony, when she considered the sheer grind the collections season must be for all those fashion drones she’s met over the years. “They’re very hardworking,” she said. “You have to have a lot of humor and perseverance to work in this business. They’re all big cogs in the wheel of this insane industry.”

Tell me about it, Chloë. As New York Fashion Week drew to a close, it was hard not to think of the marathon that accompanied it: the dinners, the luncheons, the presentations, the cocktails, the after parties, the after-after parties, the Brooklyn raves, the Hell’s Kitchen raves, and on and on. And there’s still Europe.

On Tuesday, Langley Fox, Ernest Hemingway’s great-granddaughter, was at the Jane hotel for Kate and Laura Mulleavy’s after party following their spring Rodarte show. Laura was celebrating her 34th birthday with a cake shaped like Tom Selleck’s character in “Magnum P.I.” Why? “Because we love ‘Magnum P.I.!’” she said. They followed it up with a Domino’s pizza party, and why not? It was almost the end of fashion week, they might as well indulge.

That seemed the mood Wednesday too. W magazine convened a luncheon for “It” girls. Or, anyway, those girls the magazine has determined must have “It” — Fox, Dakota Fanning, Chiara Ferragni, Hanneli Mustaparta, Atlanta de Cadenet, Kilo Kish. There are different varieties of this species, but they’re all invariably cute and perky and buzzy. Naomi Campbell’s “It” girl-ness, then, must be a state of mind.

No doubt about it, Campbell could once claim the enviable title, but does she still consider herself one? “I never did think of myself as an ‘It’ girl. I never have. It’s what you guys call me,” she said, referring to the press. “I’m not into labels.”

Campbell was in Manhattan for a venture she declined to discuss. But it just so happened to coincide with fashion week, and she stepped up to the challenge of making a handful of appearances — on Diane von Furstenberg’s runway; at the Versus Versace show; at the Fashion Rocks concert. Heavy is the head of the girl that wears the “It” crown. And, so, what was Campbell’s advice to those hoping to one day earn the label?

She boiled down her philosophy to one simple credo: “You have to be true to your integrity and what you do,” she said. And that means: “Be where you want to be and do what you want to do. What’s really important is to be you.” Or her.

Much, much later, Jeremy Scott’s after party stretched on until the wee hours. A line of club kids snaked around a new venue called Space Ibiza New York that opened recently near the West Side Highway in Midtown, a part of the city that looks nothing like Ibiza. Outside, a drug dealer walked around casually selling the drug commonly known as Molly, or MDMA, as if she was outside an electronic music festival. In a way, she was. They were all there hoping to see their queen bee of the moment, Miley Cyrus, who’d made an appearance at Scott’s spring show earlier in the day. And just look at the front rows this past week — Skrillex, the electronic music superstar, has been everywhere — at Alexander Wang, Opening Ceremony, Versace. He even turned up uninvited at a Bon Appétit dinner for jewelry designer Pamela Love Tuesday night. “Oh, I don’t know him,” Love said. “I think he is friends with my friends.”

Inside Space, Scott, Diplo, Skrillex, and Leigh Lezark and Geordon Nicol of the Misshapes presided from the DJ’s booth over a crowd gyrating under strobe lights to a relentless loop of oontz, oontz, oontz. “I feel like I’m in the opening scene to a ‘Law & Order: SVU’ episode,” cracked one greasy-haired editor. The venue was segregated — the dance floor was for those in patent platforms and raver makeup, for the girl with the Moschino tote strung around her neck like a necklace and the guy in the Speedo, fringed jacket and cowboy hat. The VIP section was for Scout Willis, Shayne Oliver, Whoopi Goldberg (yes, really) and Taryn Manning of “Orange is the New Black.”

A little after 1 a.m., Cyrus was nowhere in sight and an unannounced Madonna snuck out of Scott’s booth and headed into the night, as if to punctuate the scene. Later, in an Instagram photo of her evening, she wrote, “I just want to rave in the back.”