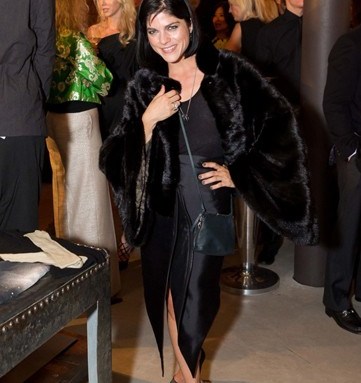 Selma Blair waltzed around modeling a super-glam black fur jacket; Vanessa Getty vamped in a vintage jumpsuit by Climaxx, and Max Boyer Glynn tipped her Trilby hat for all to see. At Tuesday evening’s opening bash for Downtown, Michael Kelter’s edgy new loft-style shop in San Francisco, it seemed every woman in attendance felt like a star.

Katie Traina is playing the role of Hollywood wife and soon heading for Rochester Hills, Michigan, where her husband Todd is producing a film starring Demi Moore. “Michigan is the new Hollywood,” said Traina. “All the big stars are filming in Michigan now.” That said, Blair noted that she will be shooting in New York this fall with director Todd Solondz.

Even actresses not in attendance haunted the event. Isha Abdullah, whose husband Asim owns Emanuel Ungaro, was wearing a white gown from a few seasons past.

“It was from the Lindsay Lohan collection,” she said. “Yes, the pastie collection. Ninety percent of it was actually very good.”