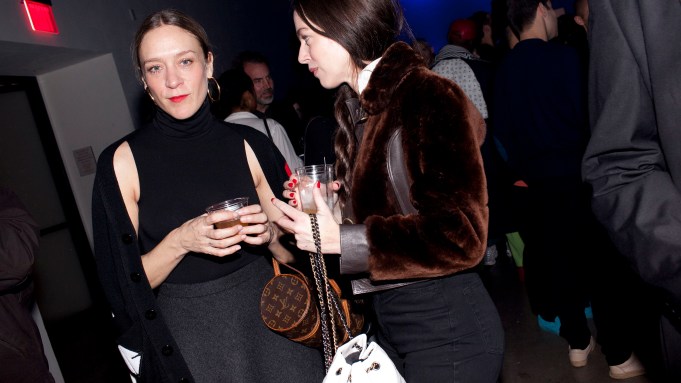 “I have to whisper,” offered Chloë Sevigny, breathily. The actress was protecting her strained voice for the Sunday night opening of her off-Broadway play, “Downtown Race Riot.” “Maybe I should get a little whiskey or something.”

Despite a strenuous performance schedule, the 43-year-old was out late Saturday as part of the host committee for Dance Left, a dance-a-thon fund-raiser in support of Swing Left, a grassroots organization that aims to increase the number of Democratic-held congressional seats in the 2018 midterm elections.

“She’s very far from me,” remarked the actress of her latest role as a drug-addicted, free-spirited single mother of two. “It’s exciting to discover something new in the same material every night. This character is one of the best characters I’ve ever played.”

But it’s using her real-life influence to draw attention to the causes she is most passionate about that gives Sevigny the greatest thrill, elaborating, “any way I can help to raise awareness and money.” Sevigny wore a “Fifties dance” inspired look by Miu Miu and Opening Ceremony. “If I can help lend my name to get people to dance, to maybe see me, maybe get a photo. I think everybody is really fired up right now.”

After a rallying speech by “House of Cards” creator Beau Willimon, the  crowd, which included Amber Tamblyn, Natasha Lyonne, Aziz Ansari and singer Sophie Auster, danced into the wee hours to a lively soundtrack provided by DJ Mark Ronson, who was joined onstage by his mother, jewelry designer Ann Dexter-Jones.

Cohosted by Opening Ceremony founders Carol Lim and Humberto Leon, the fund-raiser gathered a mix of left-leaning voters who filled the capacious Spring Studios in Manhattan to party with a purpose. “Carol and I are both born and raised American citizens,” explained Leon. “In many ways this is about us taking back what we feel like is ours.”

Waving a flashing strobe light ring in the air, Lim spoke passionately about raising political awareness, especially among younger voters, in a way that doesn’t come across as negative. “We want to be optimistic,” she said. “We can’t be all doom and gloom.”

Leon, echoing Lim’s can-do attitude, urged others in the industry to more frequently use their influence for activism. “People in fashion have to use their platform to talk about politics,” said the 42-year-old Leon. “Every designer is attached to an audience and the trend of not talking about politics needs to go away.”

Adam Selman, who has long collaborated with Lim and Leon, is equally enthusiastic about using his influence as a member of  the industry. “We’re a small community and we have to support each other,” he said. “This is what New York is really good at — just bringing friends together for something important.”