L.A.'s fashion set got a small taste of the Swedish retailer on Wednesday night at a pop-up shop. 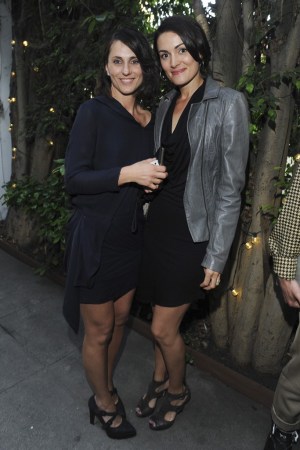 In anticipation of the first West Coast outpost by COS (Collection of Style), L.A.’s fashion set got a small taste of the Swedish retailer on Wednesday night at a pop-up shop located on the second floor of Opening Ceremony’s Los Angeles boutique.

Tallulah Willis grooved to En Vogue’s “Free Your Mind” as she surveyed the clothing racks. “I’m floored. I want basically everything. My top picks would be that amazing denim chambray overcoat and the silk jumpsuit and the striped shirt dress, but I’m obsessed. I’m in love with all of it.” The daughter of Bruce Willis and Demi Moore is also starting out on a new career path. She said she recently launched a fashion blog, TheClothingCoven.com, with a friend, Mallory Llewellyn. “Right now it’s just a fashion blog, but we have high hopes for it. We have some collaborations coming out soon that we’re excited about. It’s growing a little more rapidly than we thought it would.”

“The COS man and the COS woman have a particular mind-set. It’s a customer who is interested in art and design and demands a lot in quality. This customer exists all over the world, but particularly here in Los Angeles,” Andersson said.

COS, an offshoot of H&M, has stores across Europe, Asia and the Middle East, and the Beverly Hill store, which will be on North Beverly Drive, will open sometime later this year.

Several cool kids danced by the DJ booth to Blackstreet’s “No Diggity.”

“I’m the oldest person here, I think,” said Silver, the owner of Decades, who said he’s been a fan of COS since its inception. “Part of me is a little bitter that it’s getting more accessible in America because it’s been my secret go-to,” he continued. “It’s so funny how I’m vacillating about buying something that’s $100. It’s the coolest $195 pants I’ve seen in a long time, but this is a hard place to try on clothes. We are shoulder to shoulder. The only way I can try on something is if someone doesn’t mind me mooning them.”