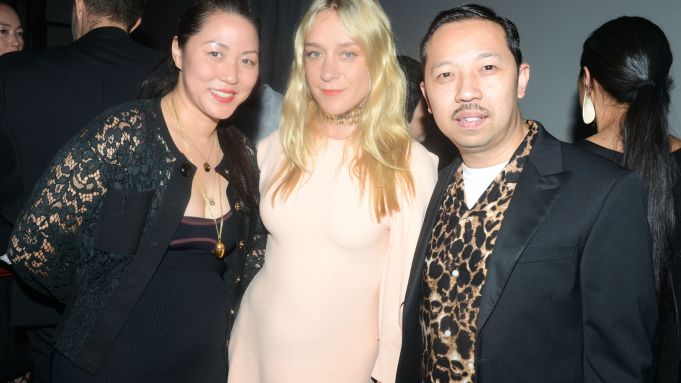 The atmosphere was, indeed, buzzing with positive energy as guests drifted past an ephemeral art installation by Jordan Wolfson presented throughout cocktail hour, which featured Bombay Sapphire libations served from a glowing claw-foot bathtub-shaped ice sculpture alongside a larger-than-life ice marionette splayed out in the center of the expansive gallery.

The creative team behind Opening Ceremony and Kenzo was equally humbled and eager to collaborate with the non-profit arts organization on a series of politically charged flags titled “Pledges of Allegiance” from artists including Marilyn Minter, Vik Muniz and Pedro Reyes, which were also on display. While some were auctioned to support the nonprofit, others — including one from Yoko Ono, which touts a message of peace — will begin appearing monthly over the next year in various locations throughout New York City.

“It will be a little bit of a treasure hunt,” said Creative Time executive director Katie Hollander. “This will give people the opportunity to discover something new. The Yoko flag will go up on June 14 — Flag Day.”

Waris Ahluwalia, who joined the board of the organization last year, noted the importance of art in everyday life. “Art should exist outside of a museum or a gallery and should be free living in the city where people can come across it and be inspired. It’s not about the art, it’s about the countless people that see it and have a beautiful moment of inspiration.”

The convivial atmosphere inside the dinner reflected this inclusionary attitude, with guests seated at rustically adorned tables featuring a large lazy Susan that served a family style meal of global cuisine prepared by Angela Dimayuga of Mission Chinese and The League of Kitchen Chefs.

Guests were wide-eyed as servers presented side dishes of cucumber salad and corn pudding along with the main course: a charcoal and salt roasted fluke, which appeared like a dark gray slab of wet cement sprinkled with edible flowers in primary colors, but cracked open to reveal the flaky white fish.

After the meal, honoree Carol Lim discreetly slipped off a pair of electric yellow Chloë Sevigny x Opening Ceremony heels and traded them for a pair of nondescript clogs. “We’re excited about tonight. We have a platform that could actually create awareness of Creative Time for [the] long-term by creating product with different artists and helping amplify events with limited-edition product. We have so many resources.”

In conjunction with next month’s “Pledges of Allegiance” debut, the influential designers created a limited edition box set of T-shirts and sweatshirts featuring the flags’ designs available on their web site through June 30.

The arty crowd capped the night with a dance party of Motown tracks and a dessert offering of strawberry almond freeze from Pressed Juicery finished with a drizzle of almond butter, chia seeds and freshly cracked pink Himalayan crystal salt. As the energetic sounds of The Supremes blasted, a young couple locked lips on the dance floor in a lengthy moment of passion, confirming Sevigny’s earlier observation.

Check Out More From WWD: