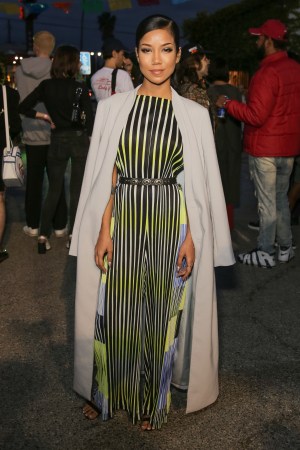 There were plenty of reasons to celebrate at Opening Ceremony’s “Spring Fiesta,” which could be seen and heard from the street as guests like Karen O, Lykke Li, and Jhené Aiko arrived on Thursday night. The group gathered in the parking lot of the retailer’s Los Angeles boutique to fete OC’s Issey Miyake Pleats Please collaboration. The evening also doubled as a Cinco de Mayo block party complete with a taco truck, margarita station and carts touting churros.

“It’s very relaxed and festive,” said Li, who turned out to support her Yola Mezcal brand, which provided the night’s libations. She launched the company last month with friends during a private Beachwood Canyon house party that drew Lady Gaga, Lana del Rey, and Sam Smith. “We founded the brand in Oaxaca, Mexico, so it’s great to be able to have the Mexican vibe here in L.A. full-on.”

But Li noted she wouldn’t be able to stay out too late. “I have to get home to my baby,” said the new mom, who is showing no sign of slowing down. Li is currently working on new music in addition to forming a new band called Liv with her partner Jeff Bhasker, Miike Snow’s Andrew Wyatt and Pontus Winnberg, Warpaint’s Stella Mozgawa, and musician Jonathan Wilson. Of Liv, she said, “I wanted to have fun and get back to the reason we all did music. It’s for the love of it. It’s the best from the Seventies, Eighties, Nineties combined in one.”

Elsewhere, Karen O — who gave birth to her first child nine months ago — was also enjoying the rare night on the town. “I’m dressed to impress tonight,” she said. “The Opening Ceremony folks do the coolest stuff. I’ve been a fan of Issey Miyake’s for a while too.”

In keeping with the night’s theme, Mariachi Arcoiris de Los Angeles, the world’s first Lesbian, Gay, Bisexual and Transgender mariachi band, played a few tunes after The Sunland Dancers performed wearing flower headdresses paired with pieces from the Issey Miyake Pleats Please x Opening Ceremony collaboration. (The five-piece capsule collection, which features a tank, skirt, dress, tunic and pants, ranges in price from $270-$675, and is available exclusively at Opening Ceremony’s U.S. boutiques. It will be available at its Japanese locations later this month.)

Aiko, whose new album Twenty88 launched last month, noted, “I would actually wear this to perform because it moves so well.”