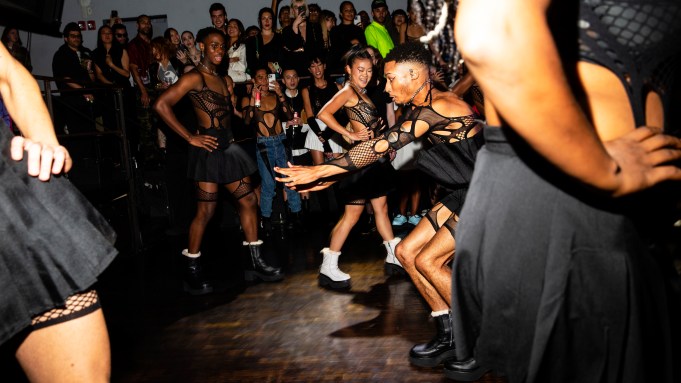 When they were part of the official NYFW show schedule, Opening Ceremony was known for throwing one of the week’s most fun parties — so it was a boon for club kids and fashionistas alike when the brand announced they would be holding a 20th anniversary bash, in celebration of their two decades in business and of their latest collaboration, with Ugg.

The destination was Schimanski in Williamsburg, where guests like Ilana Glazer and Bowen Yang danced about to a performance by Kevin Aviance, as well as sets by Mazurbate, Papi Juice, Todd Terry and more.

“It’s our 20-year, which feels insane that it’s been 20 years since we started Opening Ceremony,” said Humberto Leon of OC backstage at the peak of the party. “It’s always been this little small personal project and it’s exciting that all these people are here to celebrate with us. I mean, through the years, I don’t think we knew that we were discovering all this incredible talent at the time, and I look back now and I look at all the people who have come through Opening Ceremony and it’s like everyone single one has flourished in the most amazing way, and I hope to continue to do that.”

The collaboration with Ugg features two styles, a clog and a boot, the latter of which Leon had on for the party.

“They’re shockingly comfortable,” he said. “I said I want to design Uggs that you can wear to a club.”

Reflecting on the crowd that had turned out for the night, Leon said he was proud that Opening Ceremony events have always drawn such a wide-ranging group.

“We’ve always been about cross generational bridging, and I think that Opening Ceremony has always been this safe space for people to feel welcome,” Leon said. “And so a party like this really showcases that because there are people who probably haven’t gone out in three years and this is their first party going out, and then there are all these young kids who are here and who love going out, so I think it’s really bridging the gap between these generations.”