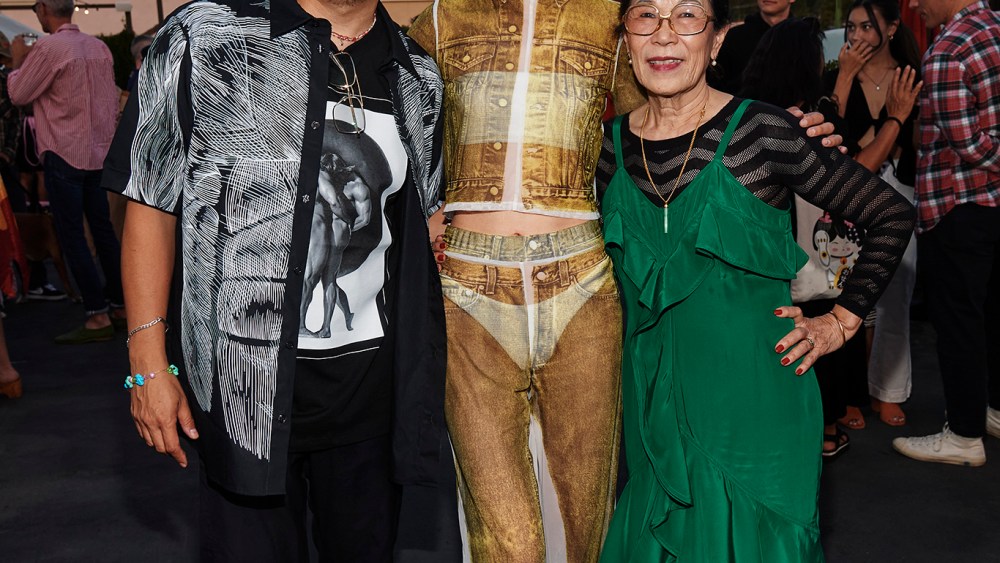 “They are the stars of the night,” Humberto Leon said of The Linda Lindas, the all-girl teenage punk band, at Opening Ceremony’s L.A. party on Tuesday night.

“We never thought the show at the library would be the one to blow us up,” said Lucia, 14. “But it’s been so fun at the same time.”

“I feel like it also was because of the message of the song and not so much of the library itself,” chimed in 10-year-old Mila, the youngest. She and Eloise, who are Chinese-American, wrote the lyrics after experiencing racism at school.

“This is about him and all the other racist, sexist boys in this world,” shouts Eloise, 13, in the video before they all rock out. They’ve since played on “Jimmy Kimmel Live!” and been signed to Epitaph Records.

Leon, a fan, had reached out to them via DM on Instagram.

“He’s been really cool and supportive of our band,” Bela, 16, said of Leon, shortly before getting interrupted. It was an acquaintance looking to introduce the ladies to Kim Gordon, the pioneering frontwoman of Sonic Youth. A longtime supporter of Opening Ceremony, she was at the event with Emma Reeves of Free The Work.

“Do you know The Linda Lindas?” asked Reeves, turning to Gordon.

“I’ve read about them, but I haven’t seen them,” responded Gordon as she said her hellos.

“That’s iconic,” said Leon nearby, as he watched them meet. All eyes were on the women as photographers snapped away.

Festivities were at the designer’s family-owned restaurant, hotspot Chifa, in Eagle Rock. Leon and Opening Ceremony cofounder Carol Lim gathered friends to celebrate the brand’s newest capsule collection: a line of Ts paying homage to the work of the late American photographer and director Herb Ritts.

“We’ve both been huge, huge fans of Herb’s, growing up as L.A. natives,” said Leon alongside Lim. “His photography has always transcended time.”

The T-shirts — available now on openingceremony.com at $215 each — showcase imagery of the human body in black-and-white shots by Ritts, who’s known for his celebrity portraits and music video work with the likes of Chris Isaak and Janet Jackson. Ritts, too, was born and raised in L.A.

“There’s a whole generation that doesn’t know the reference, and if you know his body of work, you know that it has inspired so many people and so many brands and so many companies,” continued Leon. “To give the narrative and give somebody back that representation that they deserve, feels great. And he’s gay. He died of AIDS. I think that’s something really important to remember, the artists that have died of AIDS. We always think about, ‘What would it be like if they were here today, if that didn’t happen to them, if there was a medicine that was available then?’”

Lim nodded, before adding: “As a gay photographer, he really paved the way for this new focusing on the beauty of the human form. And as this is Pride Month, [though] we always like to talk about Pride as being 365 days a year, it felt like a really beautiful person to highlight.”

“I sticked on the fringe and added the flowers,” she said, before adding, “It’s so nice to be out, isn’t it?”

It had been exactly a week since L.A. Country lifted the mask mandate.

“What a time to be alive again,” remarked American Apparel alum Iris Alonzo, cofounder and creative director of Everybody.Word. “We’re back, and it feels good.”

The crowd was in high spirits, catching up and dancing in the restaurant’s outdoor space. They sipped on Chifa’s signature drinks, “chicha morada” and “tong ling cha” (with tequila-spiked options), as dim sum — which isn’t typically offered at the Chinese-Peruvian eatery — was passed around. The restaurant’s co-owners, Leon’s mother, Wendy, sister Rica and brother-in-law and head chef John Liu, were also in attendance.

“After the year and a half that we’ve had, it feels really exciting to be able to have this event,” said Lim.

She and Leon know a thing or two about throwing a party. Whether it’s been for Opening Ceremony, or when they headed up Kenzo, they’ve hosted late-night bashes — always with a dancefloor — around the world, attracting a community of supporters, collaborators, creators and artists that include Hollywood names like Chloë Sevigny, Jessica Alba and Spike Jones. Now they’re back in L.A., a homecoming, after years in New York where they launched Opening Ceremony in 2002.

It’s the “ultimate refresh,” said Leon of the brand’s new chapter since closing all retail stores and being acquired by Farfetch’s New Guards Group, which was announced in January of last year, pre-COVID-19.

“The timing just happened to be really on our side, because, obviously, the whole world changed,” said Lim, referencing the retail shutdowns due to the pandemic.

“How we’re looking at the brand is very different than what we were doing before,” Leon added. “That feels super exciting — almost relaunching the brand and thinking about what is meaningful and how to tell our personal story within the brand.”