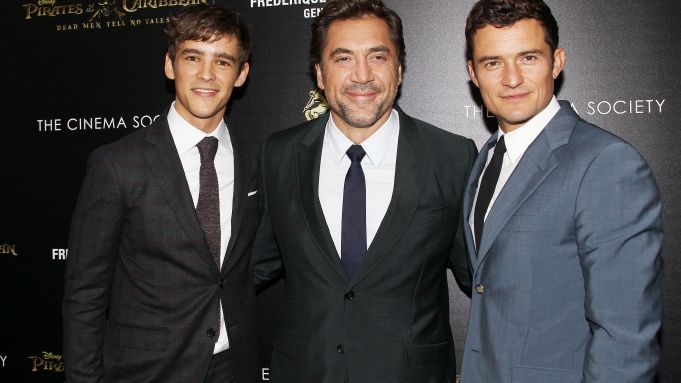 The “Pirates of the Caribbean” franchise might just be unsinkable. Now on its fifth film — “Dead Men Tell No Tales” — the series has proven to be a success, both for the box office and actors involved. Sailing into Memorial Day weekend with a May 26 release, will the film’s stars — Johnny Depp, Orlando Bloom, Javier Bardem — lead the latest installment to surpass the $1 billion gross mark for a third time?

On Tuesday night, an intimate crowd gathered in the basement of the Crosby Street Hotel to size up the latest Jerry Bruckheimer production.

Bardem appears in the film as bad-guy Capt. Salazar, who’s trying to track down Johnny Depp’s seemingly unbeatable Jack Sparrow. It’s not the Spanish actor’s first turn at villainy — he won an Oscar for best supporting actor in 2008 for his portrayal of a sociopath assassin in “No Country for Old Men.” However, “Pirates” is a Disney film; the role required him to channel evil in a less psychologically complicated way.

“It’s more about a person in constant full rage, 24/7,” Bardem said of his role, which involved layers of makeup to give him the decaying effect of his undead, seabound character. “I wanted to bring that into the physicality of him, the way he would walk and talk and interact, like a wounded animal, like somebody who really needs to get out of the arena. So it was more physical than [other villain roles], I guess.” Although it’s technically a kid’s film, Bardem said that his two young children aren’t yet old enough for the PG-13 film. “I think [the film] is quite scary. But also when Jack Sparrow comes into the picture, the laughter begins.”

Jack Sparrow — Depp — was a notable absence for the evening, although Bardem was joined at the Cinema Society-hosted screening by his suited costars Orlando Bloom and Brenton Thwaites. Bloom was quiet on the press front (maybe he decided he’s been in the news enough this week given his fling in London), but Thwaites was game to talk up his A-list roster of costars.

“Johnny and Javier are actors I’ve admired for so long in my career, for years and years, since I was a boy. To get the chance to see them work together was amazing,” said Thwaites. “When you’re watching greats like Geoffrey Rush and Johnny Depp work together, it’s like watching a play that won’t happen again. It’s a real gift.”

Five Minutes With ‘Pirates of the Caribbean 5’ Star Brenton Thwaites