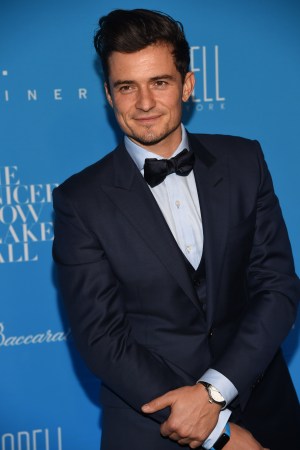 “This is truly the first event of the holiday season,” one overly enthusiastic guest said at the UNICEF Snowflake Ball on Tuesday night. The U.S. Fund for UNICEF was hosting its annual holiday gala to honor actor Orlando Bloom, HSN chief executive officer Mindy Grossman and U.S. Fund for UNICEF chief operating officer and chief financial officer Edward G. Lloyd with awards for their commitment to the organization. Attendees included Katie Couric, Michelle Monaghan, Al Roker, Padma Lakshmi, Naeem Khan and Liam Neeson, who presented “Kingdom of Heaven” costar Bloom with his award. The ball has raised more than $23 million since its inception 11 years ago.

“Kids are so lovable and giving, they don’t hold back,” said Pink, who was revealed as UNICEF’s newest ambassador on Nov. 30 and is working on UNICEF’s wearable, UNICEF Kid Power. The day before the gala she gathered with her trainer and a group of kids in Harlem to test the product, and “we had the biggest group hug I’ve ever been in.” The Kid Power wristlet “gives kids the chance to help other kids, it’s linking countries and awareness, and kids in other countries are being nourished, so it’s a win-win win-win win,” said the Grammy winner, who later in the evening performed a three-song acoustic set, including her hits “Who Knew” and “Perfect.”

“I’ve been supporting UNICEF since I was a little child — they would give out boxes to collect money, and I would go all around my neighborhood. And that was a tradition at Halloween,” said the evening’s host, Debi Mazar.

The gala, which was co-chaired by Moll Anderson and Gillian Miniter, featured a menu created by chefs Amanda Cohen, of downtown vegetarian hot spot Dirt Candy, Jessica Weiss of Marta and Maialino, and UNICEF Ambassador Marcus Samuelsson, the man behind Harlem’s Red Rooster and Streetbird.

“What I do, sometimes it can be a little uncomfortable or unnerving — Liberia was kind of interesting, having your temperature taken every 20 minutes,” Bloom, a UNICEF Goodwill Ambassador since 2009, told the crowd while accepting his award, of his visit to the country surrounding the Ebola outbreak. “But that’s a fraction compared to the truly exquisite bravery and the selfless service all those UNICEF workers who are on the ground, sacrificing and risking their own lives.”

By the night’s close, more than $3.4 million had been raised.