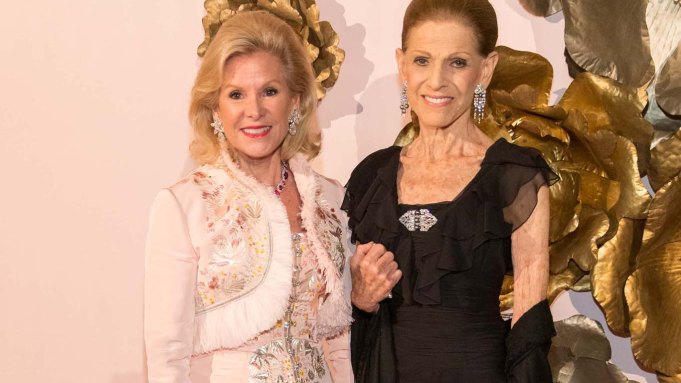 “Oscar would have loved this.”

Perhaps more than any other, this was the resounding sentiment at Wednesday’s gala to celebrate the opening of the Oscar de la Renta retrospective at San Francisco’s de Young museum.

He would have loved the garden room that seemed to re-create his Connecticut garden — and the gowns it inspired, said his widow, Annette de la Renta; he would have loved the surprise mariachi band that entertained before dinner, said former “Oscar PR Girl” Erika Bearman, and he would have especially loved so many women — and friends — wearing Oscar de la Renta in one place, said Diane “Dede” Wilsey, who met the late designer in 1963. “He would have been laughing himself silly,” she said.

Wilsey, wearing a pink embroidered gown and jacket that she joked was Valentino, recalled talking to de la Renta in August 2014 during his annual fashion show in Lake Tahoe. No one talked about his illness, Wilsey said, but she did say she’d like to do a retrospective of his work. “No,” she remembers him saying, “no one would care.” After a couple of hours, de la Renta decided that she could do it, and the two never talked about it again; de la Renta died later that fall.

As Wilsey, who is president of the Board of Trustees of the Fine Arts Museums of San Francisco, predicted, a great many people did care. Guests flew in from New York, Texas, Kentucky and beyond for the sold-out, invitation-only dinner.

Patron Lynn Wyatt, who flew in the day before from Houston and was wearing black lace, contributed three pieces to the exhibition; they specifically were looking for daywear, she said, although she also contributed a black evening gown. (The next day, she said, she’d be attending Nancy Reagan’s funeral.)

Denise Fitch, who was once married to the artist René Bouché, attended wearing a golden embroidered shirt and black skirt. She first met de la Renta at Elizabeth Arden in the Fifties.

Annette de la Renta said she loved the exhibit and couldn’t pick one favorite element, although she particularly enjoyed the red room and the garden room, which included a massive screen playing images from their grounds.

Bearman said she especially enjoyed seeing the new red carpet pieces worn by Hollywood types such as Amy Adams and Sarah Jessica Parker; it was Parker’s idea, she said, to include de la Renta’s bold signature on the back of the black-and-white dress that was created in homage to Charles James. Bearman was wearing a gardenia in her hair, the smell of which, she said, reminded her of de la Renta’s garden. Photographer Mary Hilliard, who photographed Eliza Bolen’s wedding to Alex (Eliza is de la Renta’s step-daughter and the company’s executive vice president), said the designer had a way of making one feel like the only woman in the room.

“You don’t have to be a student of fashion or understand the finer points of an empire waist” to appreciate the presentation, Bolen said. Rather, one must just see some green tulle and smile. “That’s what Oscar was about.”