The designer was awarded Carnegie Hall’s Medal of Excellence in New York on Thursday. 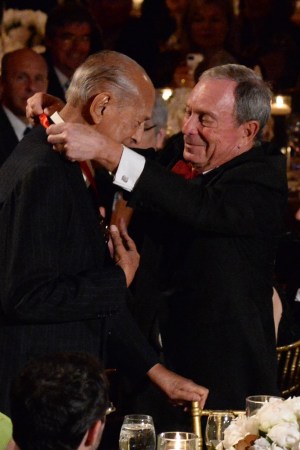 Sartorially speaking, Hillary Rodham Clinton seems to have ironed out the kinks in recent years. Though bumpy at times (her fondness for hair scrunchies, etc.), overall, she’s come to a place where she knows what works for her. According to Clinton, it’s thanks to designer friend Oscar de la Renta.

“This man has been working for more than 20 years to turn me into a fashion icon…despite his best efforts,” she cracked on Thursday night. Clinton, wearing a chartreuse silk faille top and a pair of subdued navy trousers, was speaking to a rapt audience: friends of de la Renta who had gathered at the Plaza Hotel’s Grand Ballroom to toast the designer as he received the Medal of Excellence from Carnegie Hall.

“Year in and year out, he’s never given up,” Clinton continued once the roar had died down.

De la Renta is equally tenacious when it comes to Carnegie Hall. “It’s a treasure of this city,” he said earlier in the evening as he settled into his dinner seat. “Without Carnegie Hall, there is no New York.” A dizzying concentration of dignitaries, clients and friends (many qualifying as all three) clustered around him, each hoping to get face time with the designer. “Oscar!” “Hello my darling,” and many, many variations thereof were exchanged.

“Oscar is just a wonderful human being,” said Michael Bloomberg, attempting to sidestep the air kisses to get to his dinner seat next to de la Renta. “He has such a connection and compassion for others. I’ve watched my secretary, who is also Dominican, and the two of them babble all the time. Faster Spanish than I can keep up with,” said Bloomberg, who suffered his fair share of ribbing during his mayoral days for his tortured Spanish.

Secretary Clinton and President Bill Clinton were whisked into the dining room moments after the dinner bells chimed and the jumble of well wishers had dispersed (no doubt a Secret Service precaution). The room — brimming with the likes of Chelsea Clinton and Marc Mezvinsky, Henry Kissinger, Diana Taylor, Ricky and Ralph Lauren, Barry Diller and Diane von Furstenberg, Anna Wintour, Mercedes Bass, and Alec and Hilaria Baldwin — rubbernecked as the Clintons traversed the room.

President Clinton, who spoke just before his wife, ticked off de la Renta’s many hats: designer, philanthropist, treasured friend, etc. “You’re even a pretty good singer,” he smiled. “You would be an easy person to resent, because you are good at everything you do.”

Before guests filed out and trucked it over to Carnegie Hall for the Julio Iglesias concert, de la Renta used his acceptance speech to let the other Clinton know he had a new project to get tenacious about. “My beloved Hillary, do not disappoint me,” he said, wagging his finger. “You have to be President, OK?” She responded coyly with a noncommittal gesture: something between a shrug and a head shake. And, a smile.