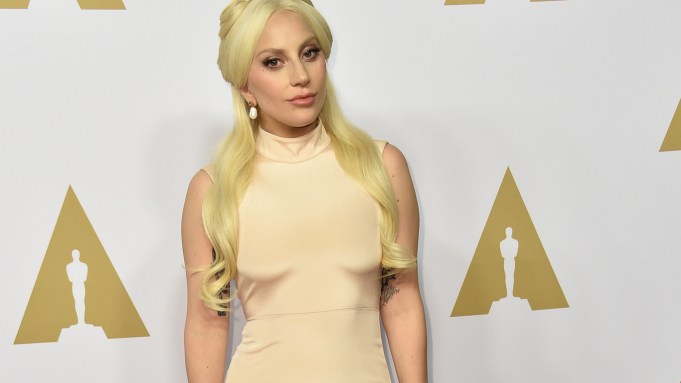 The Oscar Nominees Luncheon is considered a relatively private affair for the chosen ones to celebrate amongst themselves. That said, press is still invited and the obligation for the stars to pose and answer questions is there. They have to sing for their supper, so to speak, before entering the ballroom of The Beverly Hilton hotel.

Befitting of her newcomer status, Best Supporting Actress nominee Alicia Vikander was the first to show up in the interview room, where invited press was sequestered, wearing a kicky red Louis Vuitton number — no one even bothered asking her who made the frock.

“I met Alex Garland on the way in here and we both couldn’t really say anything, we’re like, ‘What are we doing here?’” she said of her whirlwind awards season so far. “It’s not only the last few months; it’s the journey of all the films you’ve done.”

Asked how the Oscar nomination has changed her, she said, “I’m still trying to get used to it. I haven’t done many interviews at all until this year.”

Vikander was followed by Brie Larson, who tried to calm her nerves by addressing the roomful of reporters with, “Thank you all for coming,” then erupting into a grin, adding, “I was trying to be serious.”

Asked about the process of selecting her Oscar gown, she said, “It’s trying to reflect what my soul looks like, which is far more complicated than what any dress could ever be.”

Rooney Mara said she hadn’t even tried on any of her prospective gowns yet, noting, “Hopefully I will soon because time is ticking. Sometimes you just try one and sometimes 20. The process is always different.”

Rachel McAdams didn’t have time to field any dress questions, but she did earn a round of applause when she entered the room, with her sequined pink Prada dress seeming to please.

Fashion talk aside, a dapper Eddie Redmayne, coming into this year’s Best Actor race with the trophy from last year, said, “At last year’s Oscars I was a bundle of nerves. This year, I’m going to try and enjoy every moment. I always promise [my wife] Hannah it’s going to be sunny in L.A. and it was raining last year. This year, it looks good.”

Of all the relative newcomers in the race this year, fan favorite Sylvester Stallone said he was looking forward to getting to know them. “You would be surprised how many of them I don’t know. The last time I was here [for his Best Screenplay nomination 40 years ago] Lincoln was still in the White House.”