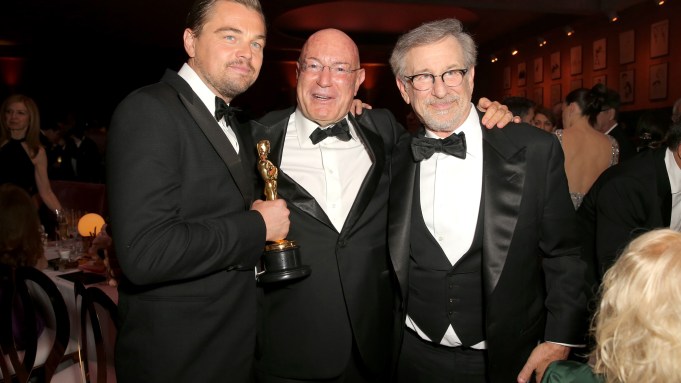 There’s little left to chance within the strictly regulated confines of the Hollywood and Highland retail and entertainment complex where the Oscars take place. After leaving the three-hour-plus 88th Academy Awards ceremony in the Dolby Theatre, the nearly 2,000 guests are shepherded through more security checkpoints and into the adjacent ballrooms for the Governor’s Ball — the first and official after party, and the first time many attendees get to put food in their mouths all day.

Everyone remembers J. Law’s pleas to her handler to let her eat McDonald’s on the pre-show red carpet when she won Best Actress a few years ago because the girl knew she’d be starving by night’s end. This year was no different. Best Songwriting winner Sam Smith, who’s now practically sample size after some stringent awards season regimen, said, “I’ve been eating some of the most boring food for a month now and I’m gonna destroy some burgers and chocolate cakes and some beer. You have no idea.”

Best Supporting Actress winner Alicia Vikander (her status as Most Adorable also sealed after Sunday night) was thinking more along the lines of a drink. “To celebrate I hope I can go outside to get a glass of wine and meet up with all my friends and family.” Not one to ever shy away from a dance floor (she was also front and center shimmying at Louis Vuitton’s Palm Springs Resort show post-party last May), the ex-ballerina added, “I even have a short dress in front so I can bounce and dance in it, so that’s what I’m going to do.”

The night’s golden boy, Leonardo DiCaprio, was a tad more restrained when addressing the media backstage. One reporter, who had given him an Oscar-shaped chocolate on the red carpet earlier, asked if he’d had a chance to taste it before picking up his real one. “I didn’t. I’m sorry.” He then uttered his most-used phrase of the entire weekend: “Thank you.”