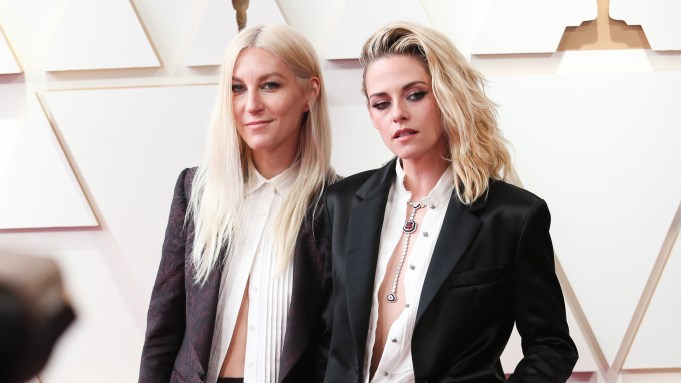 The “Spencer” star, who took on the role of Princess Diana, arrived with fiancé Dylan Meyer.

It was a bright and sunny Oscar day on Hollywood Boulevard.

“OK! Ready?” she smiled, giving a twirl in a strapless Armani number.

“Even in this weary world that we live in, dreams do come to,” said the 31-year-old “West Side Story” actress holding her trophy on the Oscar stage.

“I love you so much,” she told 90-year-old Moreno, sitting in the audience. Moreno had taken on the same role, Anita, in the 1961 adaptation and also won the Oscar.

The two had embraced on the carpet, before Spielberg joined the duo as photographers snapped away.

“Yes, Alana!” shouted Este as she posed. “She’s so pretty,” she said, clapping, before the three posted together.

“We are very backed up, so we’re going to be moving quickly,” an Oscar rep told photographers.

The long line passed the security tent, she said.

“Hi, nice to see you,” Schumer, one of the cohosts of the night, told photographers before striking a pose.

Grabbing Fischer by the hand, she pulled him in for a kiss.

“You’ll get the hang of it,” replied the comedian and actress to laughs.

“How long have you guys been here?” asked Benedict Cumberbatch, sporting a yellow and blue pin in support of Ukraine, with wife Sophie Hunter. “How many hours?”

“This is my daughter, Chance Combs,” he announced.

“Let’s get some singles,” shouted a photographer.

“Yes, let’s get some singles,” he replied, stepping away. “A future Oscar winner right here, so these pictures are going to be valuable.”