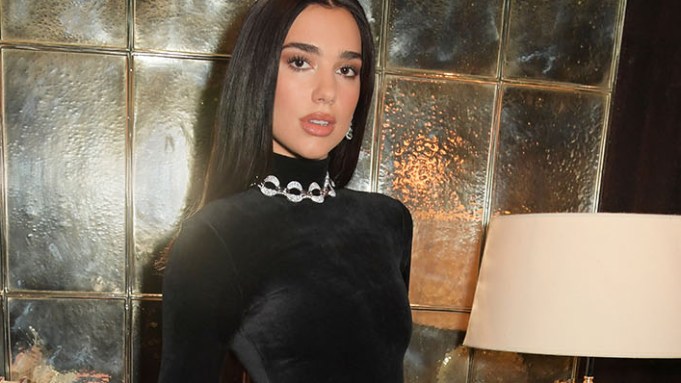 It was an Oscars weekend like no other in recent times in Los Angeles.

Chanel’s annual, star-studded and intimate dinner was canceled this year amid COVID-19, as was Vanity Fair’s notable bash.

Sir Elton John, however, took his viewing party online, which raised $3 million on Sunday for the Elton John AIDS Foundation — his nonprofit established to support HIV prevention and education.

“When I got sober, I wanted to do something to give back,” he said of starting the organization in 1993. “My life completely changed with sobriety, and I thought as a gay man I hadn’t done enough for the people that have died from AIDS and HIV in the 1980s. I wasn’t militant enough.”

Hosted by the iconic singer alongside his husband, David Furnish, and emcee Neil Patrick Harris, the event featured virtual appearances by three major stars: singer-actress Cynthia Erivo; Dua Lipa, who performed stripped down versions her radio hits in two striking Balenciaga numbers (even joining Sir John for a duet), and Lady Gaga, who videoed from the set of “House of Gucci.”

“This last year has taken a huge toll on the mental health of people all over the world,” said Gaga, seemingly dressed in character as Patrizia Reggiani in a red velvet ensemble, ’70s style blowout and sunglasses. “We’ve all had those days, weeks or longer where we might look OK from the outside but inside is a different story altogether. Mental health is fundamental to our physical health. And this is especially true for young people fighting HIV. It’s tragic to think that a quarter of adolescents living with HIV don’t access the medical care they need, because of depression or feeling overwhelmed. The reality is, we won’t end the AIDS crisis unless we care for both mental and physical health.”

She went on encouraging viewers to donate by scanning the QR code or texting the number on their screen.

Dr. Anthony Fauci, too, showed up — remotely as well — discussing the health disparities with both HIV and COVID-19 impacting people of color.

“Young people are particularly vulnerable to HIV, accounting for approximately one-third of new HIV infections,” he said, adding that reduced levels of HIV testing, as well as “interruptions” in supplies due to COVID-19 are “extremely concerning.”

“Serious challenges lie ahead for combating the global COVID-19 pandemic,” Fauci went on. “Yet, as we navigate year two of this pandemic, a pathway to defeating it, lit by the rapid development of safe and highly effective COVID-19 vaccines, gives us reason to hope.”

Following the Oscars, most went home to bed — but not Andra Day, who was nominated for best actress for her work as Billie Holiday in “The United States vs. Billie Holiday.”

Post-show, the singer-actress was holding court at Spring Place, the members club in Beverly Hills, Calif., for her after party. She still had on her custom gold Vera Wang gown, but had traded in her heels for some comfy slides. Other attendees included Emma Roberts, Garrett Hedlund, Winnie Harlow and Evan Ross. Reportedly, everyone had to get COVID-19 tested before entering.

Created in partnership with L.A.’s Academy Museum (dedicated to the art and science of film, opening on Sept. 30), it was a virtual series of chats moderated by the museum’s chief artistic programmer Jacqueline Stewart, in conversations with Oscar winners and trailblazers Sophia Loren, Whoopi Goldberg, Marlee Matlin and Buffy Sainte-Marie. The affair was inspired by von Furstenberg’s yearly luncheon held to honor female Oscars nominees.