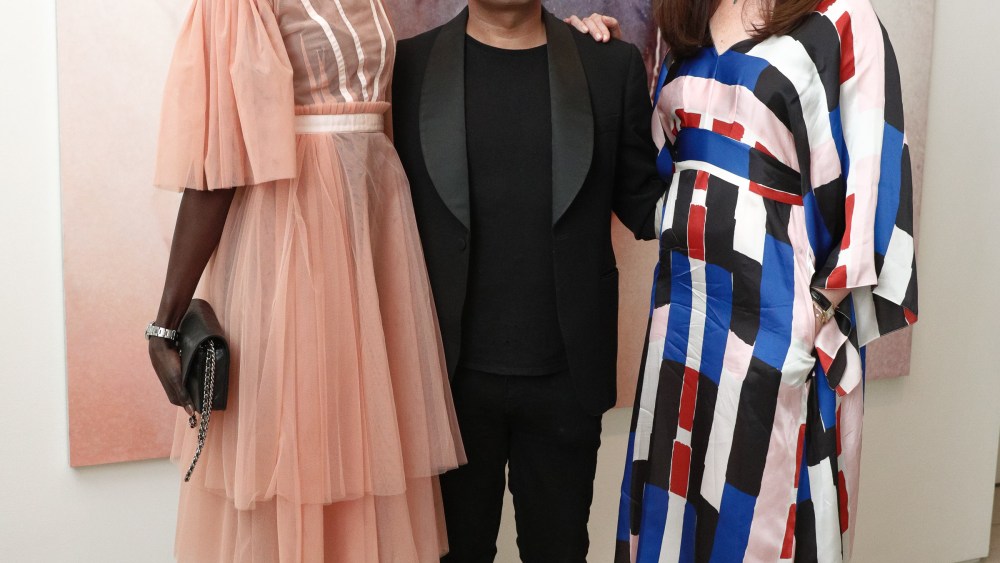 “It’s a great dress, isn’t it?” cooly remarked newly appointed Barneys New York CEO Daniella Vitale of her geometric Osman frock to a woman who happened to be wearing the same Resort 2017 look at the Salon 94 cocktail party in New York.

The Wednesday evening affair celebrated the debut of designer Osman Yousefzada’s emponymous collection at Barneys and was held in the cavernous private gallery space within curator Jeanne Greenberg Rohatyn’s Upper East Side townhouse.

“When my brother — who is 17 — throws parties I need to be there and say nobody touch the art,” explained Rohatyn’s teenage daughter, Coco, of her family’s massive minimalist home. “Everything in this house is a piece of art.”

The line between art and utility was so blurred that many guests pondered the permissibility of actually sitting upon a pair of curved midcentury sofas, which were recently reupholstered in a cork-like fabric. One ravenous guest, armed with a plate of cured meats and cheeses along with a flute of Perrier-Jouët, plopped himself at the Rick Owens-designed dining table before a team of eagle-eyed staffers thwarted his dining plans — although permission was later granted.

But this was, in fact, the ideal space to celebrate Yousefzada’s artistically focused pieces as well as toast the fifth edition of “The Collective,” an art and fashion magazine that explores the designer’s multi-faceted creative collaborations.

“My clothes are architectural and quite feminine,” remarked the British designer. “They’re [designed to] actually fit a lot of people. You’re not going to just have 1000 models who are going to buy your collection.”

Vitale — who was immediately impressed with the uplifting, whimsical aesthetic of the Osman line — noted how she first fell in love with the product and then quickly fell in love with Yousefzada himself. “His design ethos is really in tandem with Barneys,” she continued. “He cares about art, he cares about journalism, essays, and politics. That narrative is very important to what we do as a company.”

Alek Wek, Jennifer Creel, Richard and Lisa Perry, Chloe Wise, and Jessica Joffe were among the other guests who flocked to the tony 94th Street locale. Actor Ansel Elgort , who was joined by girlfriend Violetta Kimysha, noted how the house’s contents would be an art thief’s holy grail.

“I have a movie coming out in June called ‘Baby Driver’ and I play a getaway driver,” said the 23-year-old. “I would love to heist this house. I love the art. Whose house is it? Someone important? It’s a gorgeous house.”

While most of the fashion-forward guests very clearly focused a lot of attention on their sartorial selection for the evening, Elgort took a more casual approach to his choices. Lifting his arms in an animated gesture, his boldly patterned t-shirt shifted to reveal a waistband emblazoned with “Ellen” peaking above his navy trousers.

“Oh, yeah, Ellen [Degeneres] gave them to me,” he said. “When you’re on ‘Ellen’ you get Ellen boxers. I didn’t even realize. They were just in my underwear drawer.”