By Leigh Nordstrom on May 6, 2016
View Slideshow 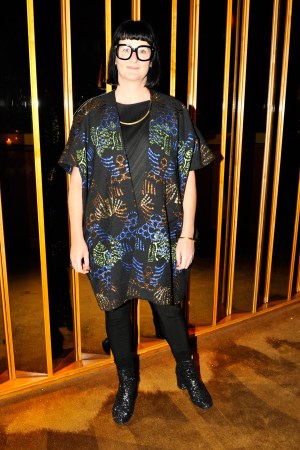 Lest we begin to think this first week in May is all about the Met machine, Frieze Week kicked off to remind the fashion pack that other cultural happenings are, you know, still a thing — though one wouldn’t know it from Thursday evening’s Pace Gallery dinner venue. The gallery hosted a dinner in honor of James Turrell and Richard Tuttle at — where else? — the Top of the Standard, in honor of Frieze, which drew Misha Nonoo, Prabal Gurung, Cleo Wade, Nell Diamond, Chuck Close, Julian Schnabel and Tara Donovan.

“Cinco de Mayo, right?” a woman in a colorful smocked top offered in explanation of her attire. In was, in fact, Cinco de Mayo, which served as the inspiration for flying in the band Los Hijos de Frida from Sinaloa, Mexico, where Turrell’s installation “Encounter” is on display.

Dan Kluger of ABC Kitchen fame prepared a thematic menu, a whetting of the appetite for his individual restaurant, which he plans to open this summer, which was the draw for some in attendance. “Enough of this chitchat, when is this all happening,” said one guest lingering by the then-empty buffet table.

“Oh, it’s so terrible, but it’s my own booth,” said the Pace Gallery’s Marc Glimcher of his favorite thing at Frieze. “But right now we’re all Tuttle and Turrell crazy, as you can tell. They are two of the great living artists in the world. They both come right after minimalism. Turrell has led to so much installation art, and Tuttle goes the other way; Agnes Martin was his mentor and created what we call post-minimalism, which is such an important idea of how art can continue.”

Nonoo had yet to visit the fair, but art adviser B.J. Topol spoke highly of this year’s display. “They improve it every year,” Topol said. “It’s the best galleries you want to see, then they add great food — because you can’t collect on an empty stomach — so all my clients are so happy because they eat well.”

Her fashion choices this year have also upgraded the experience. “This year was the first year I wore sneakers both days, the whole time. I take my cue from her,” she said, motioning to Nonoo. “If your feet hurt, your brain hurts, and then you can’t sell art,” Nonoo added.

One person less impressed with the Randall’s Island annual pop-up was Donovan. “I don’t do fairs. Fairs are not for artists,” she said. “It looks like the Costco of the art world.”