There were drag queens in the basement, New York Rangers in the stairwell, movie stars on the top floor and painters all around Wednesday night at the First... 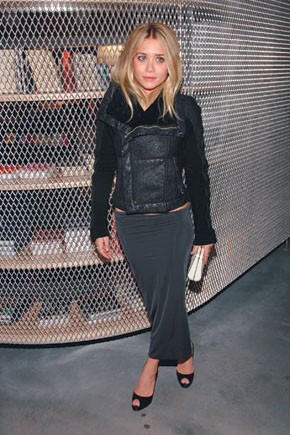 There were drag queens in the basement, New York Rangers in the stairwell, movie stars on the top floor and painters all around Wednesday night at the First Look party at the New Museum on the Bowery, sponsored by Calvin Klein.

This being a brand-new building, there are still a few kinks to work out (one jam-packed elevator temporarily got stuck), but overall, artists such as Ross Bleckner, Rachel Feinstein and John Currin seemed happy to have a new institution in town. “I’m so glad it’s here,” said Chuck Close. But is the new glossy, seven-story structure just another sign of the gentrification on Manhattan’s Lower East Side? “Gritty left a long time ago,” he said.

Feinstein, for one, isn’t terribly sad about that, either. “I’ve been down here since 1989,” she said. “Now that I have kids, I like the way [the neighborhood] is now.”

Of course, the area isn’t devoid of all of its former vices. Downstairs in the basement, The Box performer Raven O. hosted a special show for the crowd that involved a pre-op transsexual, a bottle of booze and a bare-naked rear end. Use your imagination. Or better yet, don’t.

Meanwhile, in Los Angeles, the evening was a tad more tame at Katherine Ross and Michael Govan’s Hancock Park home, where the couple hosted a dinner in honor of Givenchy’s Riccardo Tisci. It was the designer’s first trip to Los Angeles in four years and he was eager to soak up the sights. “I want to experience everything — the vintage stores, the Dali exhibit at LACMA, the celebrities,” he said. The party, of course, assisted with the latter, as guests Riley Keough and Christina Ricci showed up in support. “I think Christina is perfect for my clothes,” Tisci said.

“And we’re both Italian,” added Ricci. “Although the only thing I know how to say in Italian is ‘Shut up and kiss me.'”

Back in New York the following night, Asprey hosted a benefit for the Lenox Hill Neighborhood House, which kicked off at its Madison Avenue outpost. Guests including Shoshanna Gruss swilled cocktails and listened to a pianist bang out Coldplay hits. While Gruss called it an early night after cocktail hour, the rest of the crowd headed a few blocks downtown to the Union Club for dinner and dancing.