The film – out July 24 – is the first down the Delevingne pipeline. 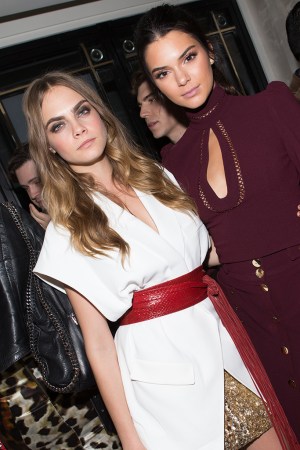 “I acted a lot when I was modeling,” Cara Delevingne said, vaguely past tense. The model — er, make that full-time actress — was at the screening of “Paper Towns” at The London West Hollywood on Saturday night. “I always felt like I was acting, because I never really felt like a model.”

The film — out July 24 — is the first down the Delevingne pipeline, which she’s quick to point out. “This is just the beginning,” she said. In the fall, she’ll appear in “Pan” opposite Hugh Jackman and Rooney Mara and later in “London Fields” with Johnny Depp. And then there’s the highly anticipated “Suicide Squad” with Will Smith, Jared Leto and Ben Affleck, slated for August 2016.

“I’m always open to learning. I feel like life is school for me,” Delevingne said of the wave of big roles, adding she’s learned “so much, dude. Just to stay true to who you are and do what you believe in.”

Delevingne’s “Paper Towns” love interest, Nat Wolff, has an equally busy year ahead from James Franco’s “In Dubious Battle”, “Grandma” with Lily Tomlin, and “The Intern” opposite Anne Hathaway and Robert De Niro. Said Delevingne, “Nat is an amazing friend, a wonderful guy, and an unbelievable actor. It’s nice to be able to work with someone who is so inspiring and lovely.”

Wolff returned the compliment. “She was the perfect partner in crime. We love each other,” the 20-year-old said, and then paused. “Cara just sneezed on me! I can feel her sneeze on my hand. I think I’d like an apology,” he added, laughing.

For his part, author John Green continued the lovefest.  “Nat and Cara brought so much depth and nuance to their performances,” he said. “Cara is special because she understands what it’s like to have people project onto you, what it’s like for people to think they know you when they don’t. That’s something that [her character] has to live with. Cara has a deep well of emotion. I think a lot of times, in public especially, she has to deflect and distract from that because there’s so much attention on her.”

Following the screening, Delevingne’s squad turned up — Jaden Smith, Kendall and Kylie Jenner, etc. — for a WSJ Magazine and Forevermark sponsored after party that served filet mignon and crab cakes.