By Katya Foreman and Robert Williams on December 9, 2016
View Slideshow 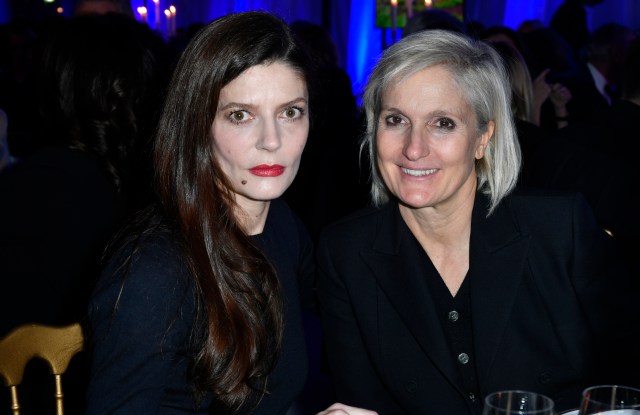 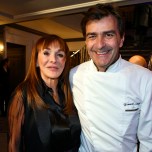 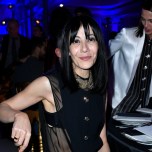 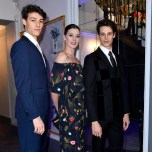 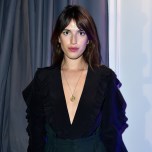 Gaultier, who played chaperone to a towering Anna Cleveland sporting a wood-print dress from his couture collection, said that on the side he is increasingly focused on costumes, including 500 ensembles for the “One Grand Show” cabaret in Berlin and stage pieces for the singer Matthieu Chedid. “He puts on a real show,” said Gaultier. “And what is fashion now, if not a show?”

As the bubbly flowed, guests got into the holiday spirit. “I’ll be going somewhere far, far, far away – but I still have to book it,” said Jarrar with a sigh, while Audrey Marnay said she was looking forward to escaping to Morocco for the New Year.

Rocking an emerald velvet suit by Ackermann, Lou Doillon said she was looking forward to a calm winter holiday in Brittany with her family, including her mother Jane Birkin and half-sister Charlotte Gainsbourg. “I’m emotionally exhausted. I’m just going to enjoy my mum’s cooking,” said the singer, who had wrapped her tour the night before with a concert televised live from the Flèche d’Or club in Paris.

Sharing her gift wish list, a statuesque Cleveland, who is working on an under-wraps film project, said: “I love a spa treatment, always. I love a good book. I love a nice dress.” Cleveland confessed she hadn’t yet written her letter to Father Christmas, however. “You know my mother always used to make me do that and my father would eat all the cookies,” she said.

On a more somber note, Irina Lazareanu talked about the experience of performing at the reopened Bataclan club, one of the key sites of the recent Paris attacks, with Pete Doherty. “It was very emotional but very healing at the same time. We did an homage for the victims. We though it was really important to do it,” said Lazareanu, also revealing that she and Doherty were preparing an exhibition of their poetry and journals for next summer at Paris’ Pompidou Center.

Singer Héloïse Letissier, better known as Christine and The Queens, said she was back in Paris writing songs for a sophomore album meant for release in 2017. The Jacquemus muse said she was looking forward to catching up with her parents over the holidays. “They complain they never see me!” said Létissier.

Star dancers of the Paris Opera Ballet were also present, including Germain Louvet, who this season was named principal dancer and is currently on stage as the prince in Swan Lake. Marie-Agnès Gillot and Hugo Marchand were fresh from having performed that evening in a new entry to the Opera Ballet’s repertoire – Jiri Kylian’s “Kaguyahime.”

As guests settled at their tables, Alleno had his own ballet of waiters serve up a starter of puréed potatoes topped with truffle and egg yolk, followed by a roll of sea bass and minced scallops. “It’s a warm and inviting cuisine. It’s comforting,” said the chef, who won a three Michelin-star rating for the Pavillon Ledoyen just nine months after taking over the restaurant in 2014.

Alleno plans to open a location in Seoul in 2017, adding to a roster of gastronomic restaurants that already include eateries in Beijing, Courchevel and Marrakech. “It’s necessary to go communicate our French values – our wines, our culture, our desire to share,” he said. “It’s the same as with fashion!”