The venue is currently hosting a drive-in movie theater, a diner and a club. 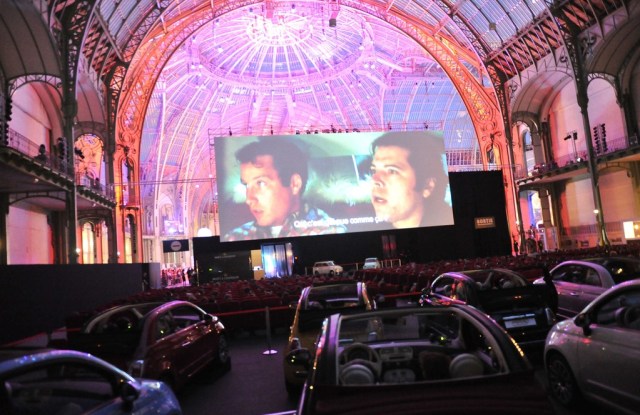 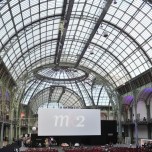 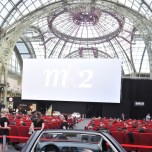 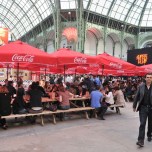 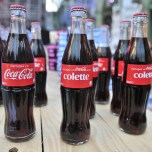 MOVIE MANIA: It’s time to dust off those poodle skirts and fluff up the beehives. Paris has gotten a healthy dose of Fifties Americana in the form of Cinema Paradiso, a happening in the Grand Palais’ central space, under latticework of glass and steel.

Its pièce de résistance is a drive-in movie theater off to the right side, which seats up to 1,000 viewers per screening – in a fleet of colorful Fiat 500s including convertibles or on lounge chairs. People can also munch on popcorn and watch the giant screen while lying on red cushy pads in the front rows.

Not every attendee on Wednesday night was a drive-in debutant, however. Both Sarah Andelman (creative director and buyer at Colette, which hosted events all that day) and model-cum-actress Audrey Marnay explained that their first experience was in the United States. That said, the novelty hadn’t worn off.

“I think it’s really amazing to be in the Grand Palais and to be able to roller skate, eat, drink and dance. I think it’s a great idea,” enthused Marnay, who added among her favorite films is “The Big Lebowski,” which had screened at the museum on Tuesday.  She recently played the role of Coco Chanel in “Opium,” the film about Jean Cocteau directed by Arielle Dombasle that’s due out in October.

Meanwhile, Andelman said she has a soft spot for cult films, such as “La Boum.” She was spotted in Cinema Paradiso’s Superclub, where DJ Pedro Winter (aka Busy P) had earlier mixed tunes. On Wednesday, other music maestros included Discodeine and Coma.

On Monday evening, Cinema Paradiso’s first day, its official partners including Fiat and Paco Rabanne invited 900 guests to the club and to a sneak preview of “Now You See Me” (or “Insaisissables,” in French).

“It’s a project that is particularly close to our heart — for 1 Million and the Paco Rabanne brand,” said Jean-Yves Granger, managing director at Puig Prestige Beauté’s France division, of Cinema Paradiso and referring to the label’s blockbuster men’s scent. “Cinema is a territory of expression that’s very interesting and also very emblematic in regard to our scent and our 1 Million saga. And notably our last campaign, which backs our new fragrance 1 Million Intense, makes reference to the Seventh Art. It was filmed in black and white by Paul Gore, who conceived it as a short movie.”

Cinema Paradiso’s facets abound. Among its other highlights are pinball games to be played, and there’s a diner serving up compulsory greasy fare, like cheeseburgers, and Coca-Cola for people eating at tables under umbrellas.

There’s eye candy, too. Next door to the eatery, tables are stacked with American produce, like strawberry marshmallow Fluff, Pop-Tarts of various varieties, Reese’s Peanut Butter Cups, Tabasco sauce and Twizzlers. And a shopping fix is possible. Books (including tomes on edible subjects like doughnuts) and CDs (think “Grease,” “Hair” and “Dirty Dancing”) may be purchased, as can some findings from Colette.