Vanessa Paradis, Gary Dourdan, Jérôme Dreyfuss, Aurélie Dupont, Carolyn Murphy and her daughter Dylan and Aymeline Valade were among guests chilling in the gardens of the Hôtel Particulier in Montmartre on Monday night. 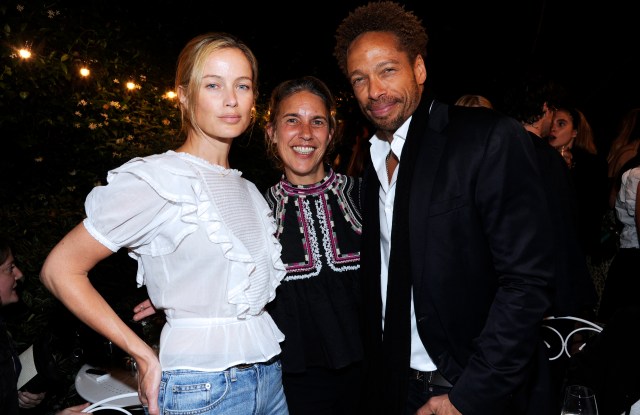 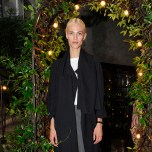 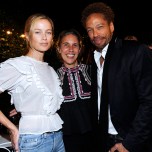 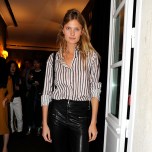 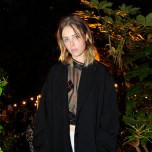 FRENCH STYLE: There was a pastoral vibe at the Isabel Marant and Mytheresa.com guinguette-themed party in Paris on Monday night. Vanessa Paradis, Gary Dourdan, Aurélie Dupont, Carolyn Murphy and her daughter Dylan, Constance Jablonski and Aymeline Valade were among the guests chilling out in the gardens of the Hôtel Particulier in Montmartre. It was festooned with fairy lights and tasty food stands including vegan pies, mozzarella and ice cream shaped on a plancha.

“We went to Pharrell Williams’ concert together. We have mutual friends,” Dourdan explained of how he knew Marant. The “CSI: Crime Scene Investigation” star is to appear in a new TV show where he plays the head of a radio station. “That’s not coming up for a while but I am about to do a film in August in Bulgaria. I have never been to Bulgaria,” he said.

Dourdan said Le Sacré Coeur, Paris’ famous basilica, a stone’s throw away from the Hôtel Particulier, is among his favorite places in Paris.

“I wanted something sympathetic and relaxed,” said Marant about the party. The designer is working on her spring collection and pre-collection before taking some time off in August.

“We go to Spain every year with a group of friends and we do nothing,” explained her husband Jérôme Dreyfuss, whose label has just added a window display at the newly reopened Ritz Paris.

“We’re in Montmartre; we’re outside. It seems that there’s surprising food,” said Paradis, before nibbling farmers’ specialties. “I know Isabel through her clothes. I have been wearing them for a long time. I am a great fan,” she added.

Andreea Diaconu is among other fans of Marant: “I believe my first show in Paris was with her and I was very young. I remember thinking I really wished that one day, I could wear these clothes because they’re the coolest things that have ever touched my body. I continue to live by that 10 years later,” said the 25-year-old model. “I used to live above her store in New York on Broome Street and that was a problem. Then I decided not to shop for a new thing for a year. I am back into shopping mode,” Diaconu added.

No holidays for Jablonski. “I redid my apartment in New York. I’m in downtown Manhattan,” said the model wearing Marant from head to toe.

Jeanne Damas has a book in the works, with journalist Lauren Bastide about Parisian women, to be published by Grasset and set to come out in late 2017. “It’s different from all the other books on Parisians,” Damas said.

“Who else should you do an event in Paris [with]? This is so Parisian, it’s fantastic,” said Michael Kliger, president of Mytheresa.com, which is owned by Neiman Marcus Group. “Isabel Marant is very important. We have carried Isabel Marant and Etoile for eight seasons — except for the U.S. — we have Isabel Marant worldwide. We continue to grow. We want to be very runway, very fashion, on the global scale….On July 15, we’ll launch Prada ready-to-wear worldwide,” Kliger said.

Courrèges artistic directors Arnaud Vaillant and Sébastien Meyer and Y/Project’s Glenn Martens were also among the guests. Y/Project will be the lead collaboration of Browns department store during London Fashion Week. The label is to take over the windows of the store on South Molton Street in London’s Mayfair and will do a capsule collection of 13 styles. Meanwhile, Vaillant said Courrèges has a project with art publication Marfa Journal that’s also slated for September.