Maria Grazia Chiuri, Olivier Rousteing and Simon Porte Jacquemus were among the designers celebrating the launch of the singer's Fenty line.

PARIS — The place to be in Paris on Wednesday night wasn’t a hot nightclub or restaurant, but rather the space formerly known as the Galerie Nikki Diana Marquardt, the launching pad for many a fashion career. Only this time, the designer making her debut happened to be a world-famous pop star by the name of Rihanna.

Bernard Arnault, chairman and chief executive officer of LVMH Moët Hennessy Louis Vuitton, and his children Delphine, Antoine and Alexandre, were among the first to arrive for a cocktail marking the launch of Fenty, her joint venture with the luxury group that owns the Louis Vuitton, Dior and Fendi labels, among others.

Rihanna’s Fenty Beauty cosmetics line, also part of the LVMH empire, racked up sales of 500 million euros last year, but if the luxury titan was seeing dollar signs, he wasn’t letting on. “Tonight we’re just here to dream. We’re not talking about numbers,” he demurred. 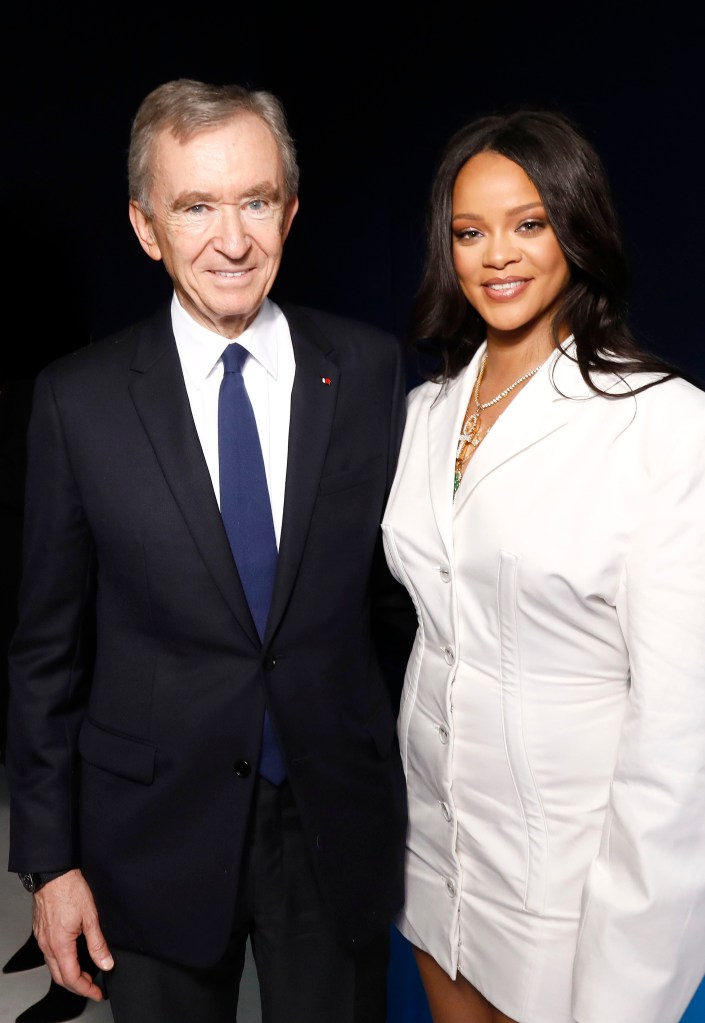 Arnault even allowed waiters to serve gold-colored magnums of Ace of Spades Champagne — the brand owned by rapper Jay-Z — in lieu of LVMH-owned houses like Dom Pérignon or Ruinart. But despite the steady stream of R&B hits pumped over the loudspeakers, the gathering was surprisingly low-key.

Rousteing, who cast the “Umbrella” singer in his spring 2014 campaign for Balmain, saw it as a symbolic moment for fashion.

“I’m so proud, so excited. I think she deserves this so much. She’s inspiring in terms of fashion, and as a woman fighting for women’s rights and diversity,” he said. “It’s really beautiful to see the world is changing, and that she’s gone from icon to businesswoman and designer.”

Rihanna has often sported Jacquemus designs, like the time she attended her street-naming ceremony in Barbados carrying one of his dainty Chiquito handbags.

“She’s supported us from the start — she’s often been the first to wear and buy my pieces. I met her at a concert in Miami and I wanted to see what she would do,” the designer said. “I love the white shirts and the suits with matching fanny packs — it’s very beautiful.”

The gallery space holds special meaning for Jacquemus. “This is where I did my first show,” he mused. 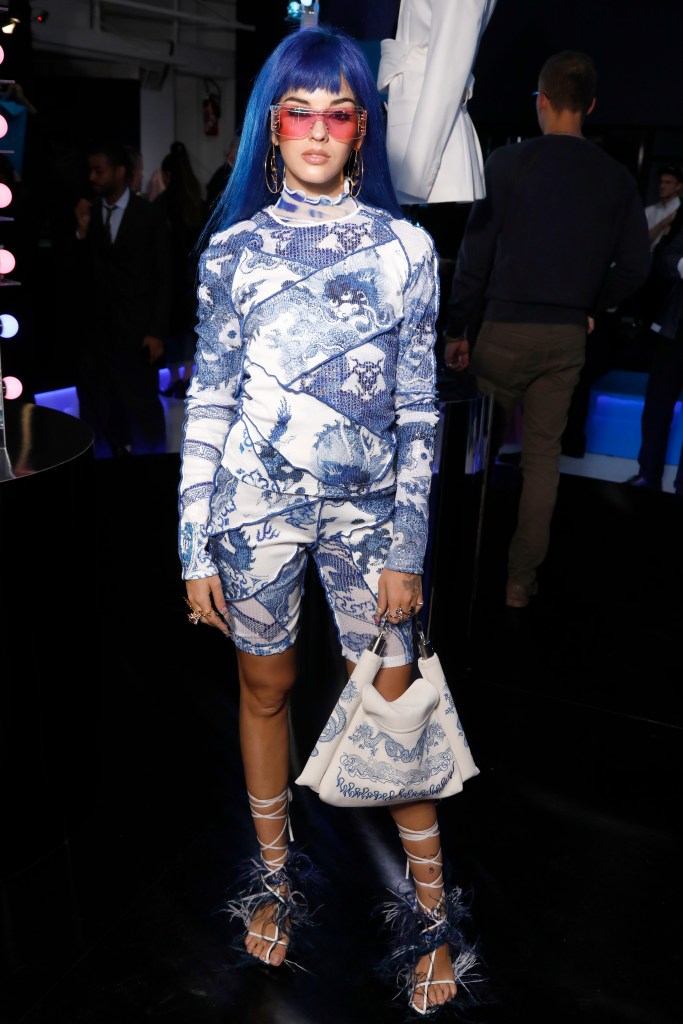 Models Paloma Elsesser and Adesuwa Aighewi were already sporting looks from the collection, which will be sold online, while Sita Abellán rocked a pair of pink Fenty shades with her porcelain-print Asai top and shorts. The DJ and influencer has known Rihanna since starring in her “Bitch Better Have My Money” video in 2015.

“I love her, I love everything she does,” gushed Abellán, who recently launched her own jewelry brand, Lilith. Could she be one of the new faces of the Fenty brand? “If she wants to take me, I will be more than happy to do it,” she said.

As the star of the evening graciously did the rounds, posing with guests and members of her team while being tailed by an imposing security guard, Antoine Arnault surveyed the scene.

“It’s moving. It’s always terrific to see a project like this succeed, especially since it’s very new for us to do something almost from scratch, starting from just a beauty brand,” said the executive, who is head of communication and image at the family-run group.

“I think the products are spot on, very current and quite new. It’s something you don’t see from luxury brands every day, so it’s great to discover something novel and fresh like this. She’s so talented at everything she does, it’s almost annoying,” he said facetiously.

The LVMH suits in the room will no doubt be watching closely how Fenty performs. “I don’t want to call it a laboratory, because it’s so much more than that, but we will try to learn from it and from this new distribution strategy. It’s fascinating. In any case, you can’t take anything for granted in our sector,” noted Antoine Arnault.

“Except that she’s a cut above the rest in terms of work ethic, intelligence — in my opinion — and getting what’s current. She’s someone who works hard. In our industry, you need to work,” he said. A bit like the song, then? “Exactly: work, work, work,” he replied with a grin. 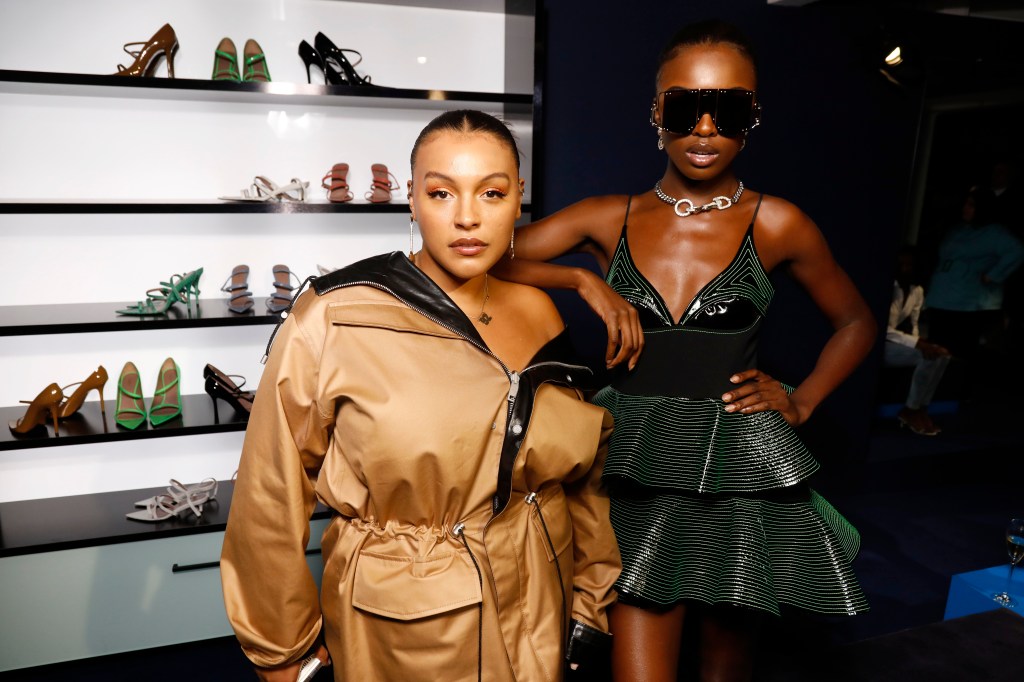 Rihanna’s LVMH Deal Could Change the Future of Celebrity Branding