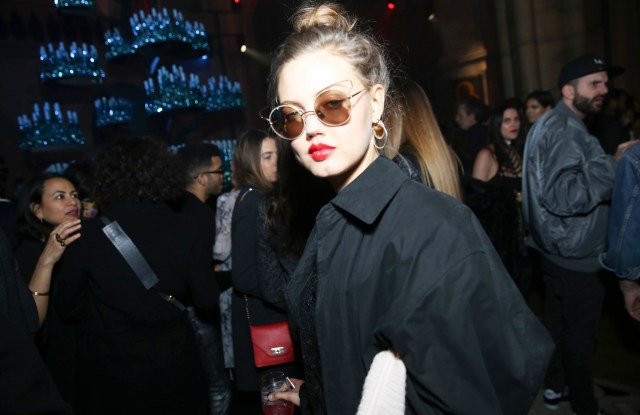 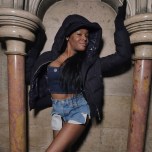 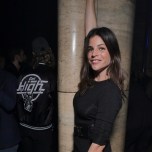 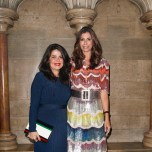 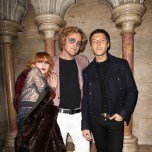 7 MINUTES IN HEAVENSAKE: Black surgical masks and instructions for photographer Massimo Vitali’s performance were handed out to guests arriving at the Heavensake “A Better High” party on Friday night, hosted by Etienne Russo, Benjamin Eymère and Carl Hirschmann at the American Cathedral, the still-consecrated Episcopalian church where Vetements showed its fall 2016 collection.

Just before midnight, taiko drums along the walls were sounded by Japan’s Yamato drummer group to announce the start of the performance. Vitali, perched on scaffolding, issued instructions for the dense fashion crowd, which included Leila Graham, Aymeline Valade, Bianca Brandolini d’Adda and Azealia Banks, asking them to turn away from the giant bonzai tree suspended in the nave of the cathedral while he captured the moment. Lindsay Wixon, eyes hidden behind sunglasses but famous pout on display, noted the ultimate high was “being in nature.” Picture taken, the party picked up.

In the crowd, leather goods designer Gabrielecorto Moltedo danced the night away with Isabelle Stanislas, who designs the Zadig & Voltaire retail spaces.

Others came straight from work, like women’s wear designer Mira Mikati. Fighting fatigue from showing her collection earlier in the day, she couldn’t resist “Benjamin [Eymère]’s incredible energy. Their choice of DJs are incredible,” she said. “If Etienne does a party, I’ll come,” echoed Anna Dello Russo, keen to tap what is new in youth culture.

“My first experience with sake was these glass cans my parents drank instead of wine. An amazing object that looked innocent but had the taste of forbidden fruit,” Louis-Marie de Castelbajac said. The Armagnac entrepreneur gamely noted both spirits required “finesse and a willingness to discover” to be truly appreciated and divulged he was working on “a project that would be akin to a French Levi’s,” hinting at the historical origins of denim.

Sake on the rocks was Christina Pitanguy’s drink of choice. “It’s a taste I acquired because we love Japanese food in Brazil,” she said. Fellow Brazilian Daniella Helayel was taking a night off from her new venture Dhela, which launched last September