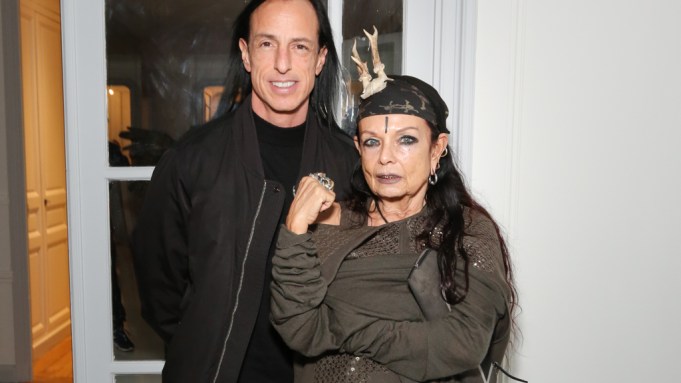 TILL DEATH DO US PART: A Magazine’s current theme — “Death and Mourning in Black and White”— dovetailed from that of Thom Browne’s fall 2015 collection. The American designer is the latest fashion figure to guest-edit the magazine, whose new issue was toasted Sunday night in Paris.

“I wanted to make sure people got into the romantic side of death, the more appreciating people’s lives side as opposed to the sad side,” said Browne, who tapped for the issue contributors including Baz Luhrmann, Martha Stewart, Rick Owens and Andrew Bolton.

Owens and his wife Michèle Lamy outline in A Magazine the plans they have for a tomb to be constructed for their afterlife together. “Because when I go, I am taking her with me. I am pulling her into my grave,” said Owens.

“Oh yeah, we are going together,” confirmed Lamy. “It’s going to be a performance.”

“It’s going to be abstract and spontaneous — and unrehearsed,” added Owens.

Meanwhile, Gaubert said he’ll prepare the playlist for his own funeral. “I am very demanding with my playlists” was all he’d reveal, refusing to dish on further details. The sound designer had just returned from Cuba, where he was scouting the location for Chanel’s cruise show on May 3.

“Conditions are particular. I had to have an idea of the sound,” he said.

The next issue of A Magazine is slated for September, making it a biannual this year, whereas typically it’s been produced once every 12 months. Van Den Eynden wouldn’t reveal who the next guest editor will be to work with the publication’s editor in chief Dan Thawley, but was quick to say who would be good.