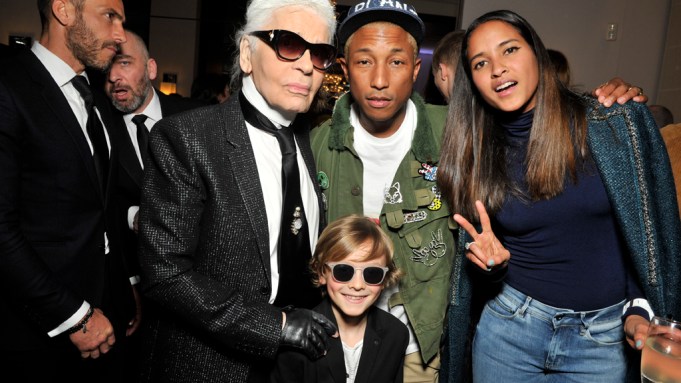 “They’re all in a good mood,” said Jefferson Hack, publisher of Another magazine. He was speaking at the cocktail Chanel cohosted with the publication to celebrate Another’s 15th anniversary and the cover Karl Lagerfeld lensed for its limited-edition birthday issue.

Hudson Kroenig was flanked by his godfather Lagerfeld on one side and Princess Caroline of Hanover and Hack on the other while blowing out candles on a vertiginous cake. The seven-year-old son of Lagerfeld’s muse Brad Kroenig later showed off his dance moves.

The party also drew guests including Caroline de Maigret, Jamie Bochert, Anja Rubik and Stella Tennant. Willow Smith, the young singer, songwriter and actress who a few hours earlier had been named a new face for Chanel, was absent.

Jenner, just out of the Off-White show with her mother Kris Jenner, struck a pose with G-Dragon.

“I have just arrived today for a shoot with Karl tomorrow for Vogue Korea,” said the South Korean pop star, who is still working on a new album. “I am waiting for the tour. It’s going to be yearlong.”

“She does,” he answered.

The limited-edition anniversary issue has as its cover a striking 3-D portrait of Lagerfeld done in hologram. “On his broach, there’s a hologram of Choupette, so now we have a hologram within a hologram. It’s a holy-gram,” Hack said with a laugh, referring to the designer’s beloved cat. “The portrait was done with photographer Rob Munday. He used a similar technique with the Queen of England. He’s the most experienced in holographic photography.”

“The cover is super cool. It’s pop. There’s a Warhol-esque quality to it,” said Waight Keller, who remembers getting the first issue of Another. “Fifteen years have gone and I still have it.”

The designer praised the Chanel show. “I love the fact he’s doing very strong colors and the mix with denim,” she said. “I always love denim. And the little white lace dress at the end — very Chanel. That was beautiful.”

“Holograms remind me of the pornographic postcards in Italy — you know the women, dress-undress — they were beautiful,” Tisci noted.

Givenchy’s creative director plans to take a break in two weeks. “I am going to travel a little bit but Brazil first. I represent amfAR Brazil. It’s in May, but I am going [to organize for it now],” he said.

Owens won’t have any holiday until the summer. “I have already started the pre-collection,” he said. “But I spend the entire summer in Venice. I have a house there.”

Jamie Bochert, who walked the Chanel show in a dark gray suit with blue sleeves, has just recorded her first album. “I am gonna play live shows now in New York and L.A. I got to go back home first and rehearse with my band. It’s  guitar and piano-driven, bluesy, psychedelic and dark, I guess. I am very inspired by Nick Cave,” she said.

Élodie Bouchez, who took in the Chanel show earlier in the day, will start shooting in Paris a new film by Erick Zonca that includes Gérard Depardieu and Romain Duris. “It’s quite dark,” the French actress said.

Another’s birthday issue, with a print run of 1,000 copies, is now available at Colette and other select retailers including Selfridges.