A taste of Sevilla was brought to Paris with Edgardo's Osorio fete to celebrate Naty Abascal shoe collaboration. 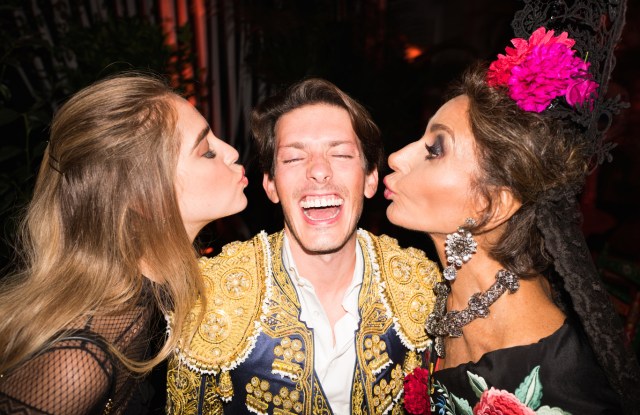 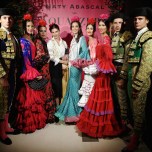 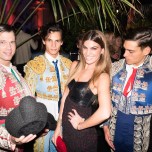 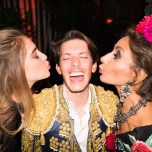 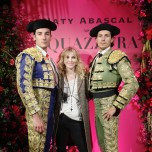 SPANISH STEPS: Aside from their sexy shoes designs, the boys from Aquazzura, designer Edgardo Osorio and business partner Ricardo D’Almeida are becoming equally known for their parties. To celebrate their shoe collaboration with longtime stylist and editor Naty Abascal, they staged an authentic Spanish dinner in the palm and orange tree-filled courtyard of the Hôtel d’Evreux in Place Vendôme. The space was transformed into a Sevillian garden complete with orange trees and performances by a slew of flamenco and other national Spanish dancers flown in from Madrid and Sevilla, among them renowned dancer Cecilia Gomez. Guests hammed it up at the step in repeat with the dozen or so male model “toreadors” or their female counterparts, the flamenca dancers in the signature red and white with black polka-dots dresses with layers of ruffles. Guests Hayley Bennett, Arizona Muse, Petra Nemcova, Courtney Love, Sabine Getty, Bianca Brandolini and Eugenie Niarchos  dressed to the theme in variations of ruffles and lace, and ate traditional dishes such as paella and jamon serrano combined with french nouvelle cuisine bites while sipping sangria and Champagne.

Abascal expressed her support for Osorio, describing him as “very talented and [having] very good taste, which is rare these days.” The two met in Milan at a Vogue Talents presentation and hit it off. Osorio said, “She has been my fairy godmother.” The collaboration came about after Osorio and business partner D’Almeida visited the Abascal’s home in Madrid and saw her collection of charms and baubles collected from her various world travels.

Osorio pointed out that Abascal has been on internationally best dressed list for more than 50 years. For the evening, Abascal was dressed in a traditional flamenca dress designed by Pilar Vera with a custom-made head piece from Sevilla. Her accessories were on the contemporary side — a hot pink VBH clutch, vintage Valentino earrings and Swarovski necklace. She carried a family treasure, her grandmother’s fan. Osorio was dressed in an authentic toreador costume thick with gold beaded embroidery. “I was with Naty in Sevilla working on the shoe collection and found this in a typical costume shop. They usually take five to six months to make. I spotted this one that was being fixed for a real toreador. I convinced the bullfighter to sell it to me.”  Osorio, designer of a shoe called the “Sexy,” looked around the room observing guests dressed on theme and smattering of models in traditional garb and remarked, “Every woman looks good in a flamenco dress.”