Designers and muses turn out to celebrate the maverick image maker. 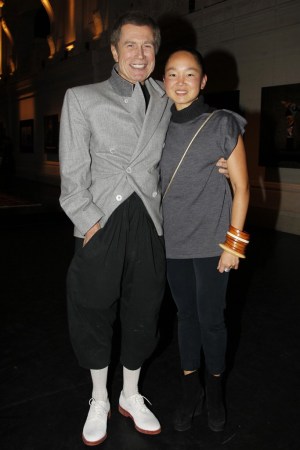 THE GOUDE LIFE: Movers and shakers from the advertising and fashion worlds lined up in the cold on Thursday night for the packed opening of “Goudemalion,” the Jean-Paul Goude retrospective at Les Arts Décoratifs in Paris. Pausing at the expo’s opening display, Azzedine Alaïa was dwarfed by a giant, rotating black dress once sported by Farida Khelfa for the “Bleu, Blanc, Goude” bicentenary procession on the Champs-Elysées on Bastille Day in 1989. “I love his universe, we’ve worked a lot together — and I hope we will continue to do so,” chuckled Alaïa.

Khelfa, who features several times in the show, said she particularly enjoyed the joyful aspect of Goude’s work. “It’s always very fresh. He has such an original and personal approach. No one photographs women like that,” said Khelfa, who is working on a documentary on Christian Louboutin.

“As the years go by, his work remains so strong and fresh, it doesn’t age,” marveled Victoire de Castellane, snapping her daughter, Zoe Lenthal, in front of one of the installations. Bernhard Willhelm was bummed that Grace Jones hadn’t turned up, saying: “She has to say thank you to Mr. Goude, because he made her.”

Dutch model Queeny van der Zande, who has worked with the artist on several campaigns for Galeries Lafayette, said that a job with Goude always means a lot of jumping around and laughter. Said van der Zande: “It’s always loads of fun working with him, it’s all good — Jean-Paul Goude!”