Willy Vanderperre photographed models prior to the brand’s recent fashion shows for a series of images called “Dis-dressed Redux.” 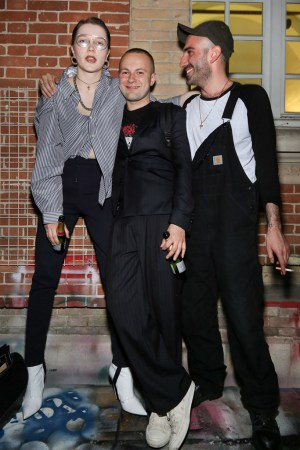 PHOTO OPP: Prada and The Broken Arm concept store celebrated their collaboration with fashion folk on Saturday night in the courtyard of a Parisian art school. Hanging on the walls of a room off to one side were about 16 photographs taken by Willy Vanderperre the night before the Prada women’s and men’s fall 2016 runway shows. Part of the series of raw, moody shots, titled “Dis-dressed Redux,” is being displayed until July 6 in the windows of The Broken Arm, which just began selling Prada’s men’s wear, including a shirt created especially by the brand.

“With these pictures, it was a very instinctive approach,” Vanderperre told WWD, explaining the photos have a bit of a Flemish painting vibe in line with the romantic spirit of the women’s collection.

The snaps were first put online and garnered a lot of attention, said Vanderperre, “so this project became something bigger than it was intended to be. We tried to approach it in a way that an art student would. It’s all about textures and different variations.”

He took photographs for hours, ending at about 5:30 a.m. “It was really intense, but at the same time it was also very exciting to be a part of the creative process because it was such a beautiful experience,” Vanderperre said, adding that some of the images are reproduced in a small catalogue.

Vanderperre is gearing up for a show in New York, beginning in September. And at the end of that same month, he will begin shooting a short film in Belgium, the third part of his triptych.

Among the crowd was also Grace Wales Bonner, the recent recipient of the LVMH Prize. First up, the designer is focusing on sales for her men’s fashion line. “Then I am spending all of August in Senegal,” she said. “I’m doing an artist’s residency there, with the Josef and Anni Albers Foundation.”

Martine Sitbon just finished a book about her fashion, which will be published by Rizzoli in English and in French in October.

“It was a lot of work,” she said, noting the process involved delving into archives and using mood boards to help explain her inspiration, design and creation.

At the same time as the book’s release, Sitbon plans to come out with a short line of reedition clothing carrying her label. “It is a limited edition,” she said.

Sound designer Michel Gaubert keeps focusing on catwalk projects. “I’ve been traveling a lot for the past two months,” he said, adding inspiration of the sound he pairs with fashion comes from numerous places. “Most of the time, I would say it’s communication,” he said. “It’s a whole mix of various references.”

Gaubert noted a recent change in the type of music that is paired with a catwalk display.

“People like to tell a story now,” he said. “The show is super short – like between five and eight minutes – so the attention span for everyone is much lower. You have to hit it right away; it has to speak to someone. It’s not about playing your favorite song or your favorite record.”

Other attendees at the party included Marc Ascoli, Virgil Abloh and Yaz Bukey.