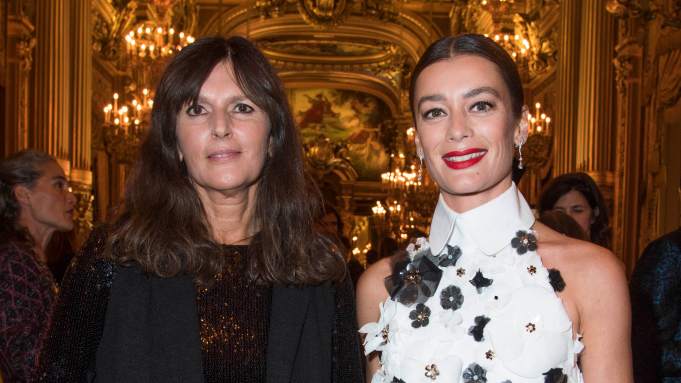 IT TAKES TWO: For opening night of the Paris Opera Ballet, director Aurélie Dupont drew on a ‘pas de deux’ theme, treating the audience to a rousing lineup of performances that stretched across the ages. A bit of something for everyone: flower-embellished tulle skirts — signed Chanel — that bounced to classical music from Franz Schubert while sparse electronic beats by James Blake sent hips jerking and legs flying.

“It transports you — for a while you just forget about your work,” enthused Haider Ackermann, relishing the pre-fashion week moment.

“Every time I’m really moved I wish I was one of them,” said the designer, recalling that his childhood fantasy of becoming a dancer was scuppered by a series of moves to various countries.

Francis Kurkdjian also dreamed of being a ballet dancer — but abruptly changed his mind at the age of 14.

“I discovered perfume,” he explained. Nonetheless, classical training — at the Paris Opera Ballet school, no less — taught him skills for his future in scent-making, he noted, ticking off the list: “A sense of effort, a sense of precision, of balance and, especially, the idea of filling up a space — a good dancer fills up the space and that’s why he has an aura on the stage.”

Among the younger set that turned up for the opening night festivities, Finnegan Oldfield was also pragmatic about dreams of becoming a dancer: “It’s too late now.”

Still, he had a crack at the art — discovering the enjoyment of it five years ago when starring in a French film, “Ceux Qui Dansent Sur La Tête,” which means “Those Who Dance on Their Heads,” about street dancers. For his next film project, he’ll be playing a farmer.

For Kate Moran — who’s filming a Netflix series in France called “Vampire,” as head of the Parisian band of bloodsuckers — the evening took her straight back to childhood.

“I started out in dance…but when you see what they do you can’t say that I am [a dancer] now,” she laughed.

For much of the crowd, yoga is the go-to sport, including rising actresses Alma Jodorowsky and Rebecca Marder.

“I would be incapable of doing that,” said Jodorowsky, of the performance she had just seen — she mostly sticks to yoga for exercise.

“I do a bit of yoga, a bit of swimming at the pool — I’m not very sporty, not very disciplined,” said Marder, who is a member of the Comédie-Française acting troupe — a job known for its rigorous regime. She is playing a young Simone Veil, from 15 to 35 years old in the upcoming biopic directed by “La Môme” director Olivier Dahan.

Yoga is also one of Vanessa Seward’s exercises of choice, said the designer, decked out in an airy black Chanel dress with pearl-stringed bracelets. She conceded that dancing is not her forte — and it seems the same goes for her daughter.

“My daughter tried — I could see it runs in the family,” she laughed, noting she did not protest when her daughter said she was ready to stop taking ballet lessons.

Camille Bidault-Waddington’s dance career, too, was cut short — she danced from the ages of two to eight, but got into trouble for talking too much.

Caroline de Maigret said she never danced — except in night clubs, “with pleasure.”

The two preferred the Rafael Bonachela-composed piece for the intimacy between dancers Stéphane Bullion and Eleonora Abbagnato. It seemed as if they were rolling into each other, a contrast to more traditional scenarios where a man carries off his delicate heroine and then prances around her.

Kiddy Smile, who turned up in a bright yellow jumpsuit with fringes and sequins that he designed himself — frustrated by the lack of choice for his tall stature — started out in dance. “But I traded in my dancing shoes for a [new] hat, to get other people dancing,” laughed the DJ.

For Blanca Li, who wears both choreographer and dancer hats, the evening was pure enjoyment.

“I let myself be carried away, I relax — and I try not to focus on the techniques,” she said.

Choreographers included George Balanchine — for the “Pas de Deux,” piece to Tchaikovsky — William Forsythe, Rafael Bonachela and Serge Lifat — his piece was “Variations,” a “pas de six,” rather than just two dancers. The legacy of Lifat, who had revived the Paris Opera ballet in the Fifties by doubling down on technical skills and raising the stature of men’s roles, was on full display with star dancer Hugo Marchand leaving the audience gasping at his jumps.

The Chanel- and Rolex-sponsored gala dinner followed the show, and guests were treated to dishes from leading chefs on the Paris scene, including Tatiana Levha, Manon Fleury, Antonin Bonnet and pastry chef Sébastien Gaudard — who served up a cake meant to evoke a tutu, complete with macarons, strawberries and vanilla ice cream.