Catherine Deneuve and Ines de la Fressange were among the attendees. 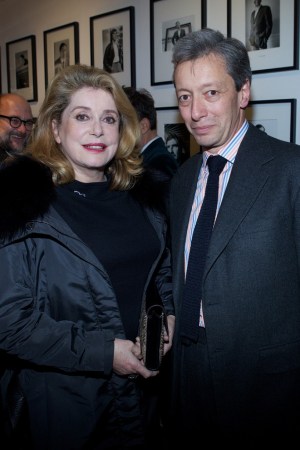 PARIS — Leave it to Frédéric Malle to lead Catherine Deneuve astray. At a bash for his book launch on Thursday night here, the actress confessed she’s no longer monogamous when it comes to fragrance.

“He really made me an unfaithful woman. I was wearing one perfume, and now I try everything he does,” said Deneuve, who was wearing Malle’s Lipstick Rose scent.

She wrote the forward of his tome, titled “On Perfume Making.”

Malle said writing a book hadn’t been a long-standing dream.

“No, absolutely not. Actually, I think it’s one of the most intimidating things possible for me,” confided Malle, adding he had originally wanted to develop images with Konstantin Kakanias (who ultimately illustrated his book) and write small texts about each fragrance in his collection. “It morphed into something bigger.”

Winding her way through the crowd with husband Bertrand Burgalat was Vanessa Seward, who said she has a weakness for Malle’s Musc Ravageur scent.

Malle’s book, published by Angelika, is due out first in Barneys, Editions de Parfums Frédéric Malle stores and Paris’ Galignani bookseller next Tuesday before being distributed more widely.