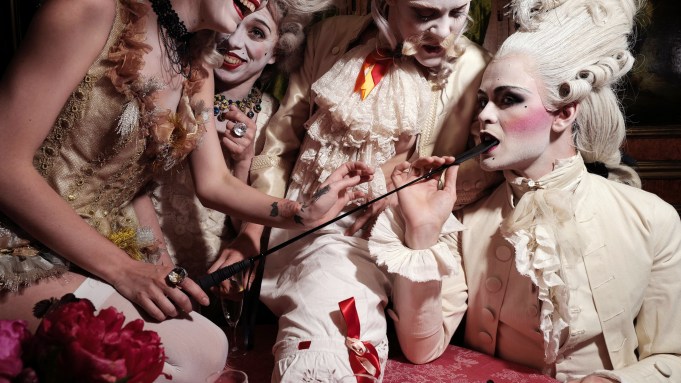 EYES WIDE SHUT: There was a commotion on the Left Bank of the Seine on Wednesday evening, just as golden hour was setting over the Parisian bridges.

Cars slowed down to take a good look at Lapérouse, the 1766-founded restaurant patronized by Colette, Serge Gainsbourg and Kate Moss. Known for its cozy alcoves and secret intrigues, the institution has reopened under new ownership and marked its rebirth with a decadent masked ball, complete with corset-wearing dames and huge torches greeting guests at the packed entrance.

“I went through my closet and tried to find the items that would be the most fitting for a masked ball,” said the actress, who was wearing a John Galliano corset dress, towering Christian Louboutin boots and jewelry by Vincent Darré, who was escorting her for the evening (and wearing a rabbit mask.)

“This place has the libertine aspect of the 18th century, the decadence of the 19th century and a little touch of discretion thanks to the alcoves,” she continued, pausing to greet a spectacular-looking Farida Khelfa wearing a green dress with a matching feathered mask. “There aren’t many places like this in Paris.”

French film director Claude Lelouch obviously felt the same way: He chose the event that evening as the setting of his next film “Les Fantômes de Lapérouse,” or “The Ghosts of Lapérouse” in English, tailing actor Christophe Lambert as he made his way from room to room, his film crew fighting through the crowded bar up to a removed alcove where corseted ingénues were lounging on one of the tables.

“It’s hard to tackle such a Parisian mammoth: Its charm mainly resided in its mustiness and strong historical heritage,” said the designer, who is working on a second project with Moma Group after Froufrou, the restaurant he opened with Patou in September. “I’m quite taken with the result: I love the Seventies-style textiles and the fact that there are famous people at every corner, even though I’ll admit it’s quite easy to get lost in all these rooms.”

Antoine Arnault, ceo of Berluti and head of communications and image at LVMH Moët Hennessy Louis Vuitton, is one investor in the Parisian establishment, the first time he has dabbled in the restaurant industry.

“Lapérouse is a Parisian legend,” said Arnault, who used to frequent the restaurant before its renovation and was personally contacted by Patou for the project. “I didn’t want such a mythical place to lose any of its sheen and be turned into something too modern. So I figured I should do something about it.”

As a result, the restaurant underwent a serious facelift. Creative director of Baby Dior and Dior Maison Cordelia de Castellane was tasked with dispensing of the heavy drapes and faded carpets to bring a bit of glamour to the historical establishment, in collaboration with hip decorator Laura Gonzalez.

Rich tapestries and fresh flowers adorned every surface of the dozens of rooms at the new Lapérouse, accessible via secret corridors and candlelit staircases. Tables heaved with dishes prepared by former Apicius owner Jean-Pierre Vigato, who was brought in to take over the kitchen, with desserts provided by pâtissier and French TV star Christophe Michalak. The entire lower level of the restaurant was transformed into a spacious wine cellar, which will house more than 10,000 bottles.

Some things will remain unchanged, though.

“In each private salon there is a tiny switch that allowed clients to shut the doors of the alcove they were in so as not to be disturbed, not even by waiters,” explained Patou at a lunch announcing the project back in April.

“The switch has existed since the restaurant’s beginning, and we are keeping the tradition,” he continued. “It allows guests to remain in complete intimacy, free to do whatever they can fantasize about doing in a private salon. I won’t go into details.”

Whatever went on for the rest of the night — the party reportedly lasted until 3 a.m. — will safely remain behind those closed doors.