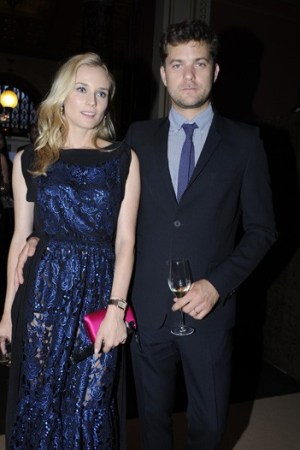 PARIS — Paris was ticking on Reverso time Tuesday night, at least at the Fine Arts School on the Left Bank, where celebrities including Diane Kruger, Clive Owen and Adrien Brody all sported versions of the Jaeger-LeCoultre luxury watch on their wrists at a party celebrating the 80th anniversary of the iconic timepiece.

“The party is being held in Paris because it is here that, on March 4, 1931 at 1:15 p.m. — you’ll appreciate the watchmakers’ precision — the patent for the Reverso was registered,” noted Jaeger-LeCoultre chief executive officer Jerôme Lambert.

The watch, which can be worn back to front, was originally developed for British army officers playing polo in India. Argentine polo player Eduardo Novillo Astrada represented the modern contingent. “I’m just in the middle of the U.K. polo season, so I arrived from London just now and tomorrow morning I have to play again,” he said.

Owen and Brody spent much of the evening catching up and posing for pictures with female fans. Owen joked that women, after all, were Brody’s favorite subject. “I try to steer him off it. I talk about children, he talks about women,” he said, collapsing with laughter.

“Talking about children? I try to steer him off that as well,” shot back Brody with a sly smile. The American actor turned serious when describing his latest movie, “Detachment,” which premiered at the Tribeca Film Festival and is now seeking distributors.

“It’s really a very special film and extremely socially relevant about the ailing public education system in America,” he said. “My father was a public school teacher, so it’s been a long time since I’ve done a film that’s touched me on that level.”

As temperatures inside the venue soared, Deneuve retreated to the V.I.P. area to touch up her makeup. Italian actor Riccardo Scamarcio slipped outside for a breath of fresh air, but would not spill about his role in Woody Allen’s “The Bop Decameron,” filming in Rome this summer. “It’s top secret. Even I don’t know,” he quipped. “No, I do know something, but I can’t talk about it.”