The event at Pier Sixty raised more than $1.4 million to benefit Parsons The New School for Design.

By Marc Karimzadeh on May 2, 2012
View Slideshow 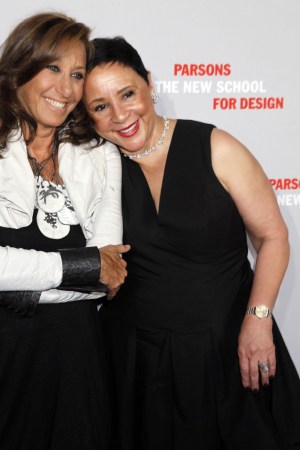 NEW YORK — For someone who famously failed draping and who didn’t actually graduate (at least not until years later), Donna Karan had a lot of advice up her sartorial sleeve for this year’s Parsons The New School of Design’s graduating class.

“You have to work a lot,” the designer said at Tuesday’s Parsons Fashion Benefit, which honored her and Parsons board chair Sheila C. Johnson. “You have to show that you can do it. It just doesn’t come easily. You have to put your mind, body and spirit to it.

“If I can give any advice to any student or any person here,” she added, “the world is growing small. Be able to go out and see it. The inspiration is there. It’s not only in your backyard. In this small family of Parsons, everyone sitting here has the opportunity and the ability to truly change the world.”

The Parsons alum was joined on stage by her co-honoree Johnson and, judging by their easy rapport, it was clear from the get-go that the designer shares a lot of values with the philanthropist and entrepreneur: the two are friends, and Karan even took Johnson on a trip to Haiti in January.

“I wear a lot of hats in my life, from the world of sports to the world of hospitality to the world of film and more,” said Johnson, whose extensive résumé includes the role of vice chairman of Monumental Sports & Entertainment, president and managing partner of the WNBA’s Washington Mystics, and chief executive officer of Salamander Hotels & Resorts. “But one of the most meaningful hats I wear is the work I do with Parsons. And, as you can imagine, I consider it to be my most fashionable hat.”

Narciso Rodriguez, another alum, struck a heartfelt note while introducing the fashion show for the top student collections: “When I was young, I had two dreams. One was to go to Parsons and the other was to work for Donna Karan.”

The benefit raised more than $1.4 million for the school’s programs and scholarships.